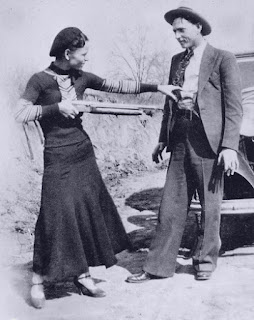 What is it about these two outlaw lovebirds, Bonnie and Clyde, that so captured the American imagination?  I remember going to see their shot-up car as a kid, parked on display at Columbia Mall in Grand Forks, North Dakota.  I thought I could see a little blood in the backseat while hearing Estelle Parsons screaming, "My eyes!  My eyes!"

What I like most about this picture is the contrast between these two cracker hillbillies, the type you'd now see in any Waffle House near any Interstate on any given morning these days, and Warren Beatty and Fay Dunaway.  Ah, cinema.  But what I like best about the movie is the raw grit and naturalism combined with the physical beauty of the two heros.  That was a haunting flick for a kid raised on the blander TV fare of the late sixties, early seventies, and that last scene still haunts me today.

What do you suppose she's saying to Clyde as they clown for the camera and mock their trackers?

"Hand that hogleg over here, Barrows, or I'll clean out your belly button with this here ole pump-action gut-shredder.  Ha!"
at December 28, 2011 1 comment:

Navajo Joe and "the other Sergio" 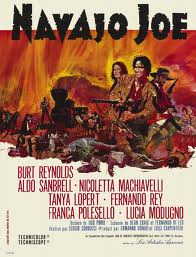 Sergio Corbucci, "the other Sergio," is one of my favorite directors.  His movies remind me of the great Gold Medal westerns put out by Fawcett books in the 50's and 60's--violent and gritty and with anvil-jawed heroes and beautiful women spilling out of their corsets.  Corbucci doesn't have the style and polish of Leoni, but he was awash in grit.  I say "awash" because in most of his movies there's a lot of mud.  (See the DJANGO flicks.)  He's also the director of possibly my favorite western movie of all time (or right up there)--THE GREAT SILENCE.

NAVAJO JOE isn't as good as SILENCE, but I love it just the same.  Burt Reynolds plays an Indian in this flick he went into thinking he was going to work with the great Leoni until he got to Italy and found himself with the other Sergio.  Burt has always said this was his worst film, but I'll be danged if I don't like it a lot.  He's very odd in it as an Indian, but I believe him as Navajo Joe, and this has got violence galore.  And some nice looking European women spilling out of their corsets.

I highly recommend it when you're sitting around waiting for a new HELL ON WHEELS, as I am...
at December 26, 2011 4 comments:

Gone to the Dogs 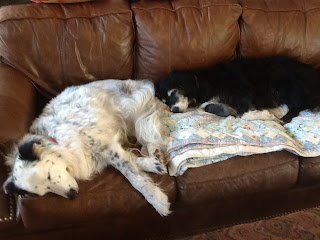 I thought I'd post this for kicks and giggles--my two old critters asleep on the couch in my office while I toil away at my desk, working for their chow.  The white one is Thor, the black one is his mother Stella.  They're 14 and 15, respectively.  (I've shed many tears of shame over the girl's moral character ...or lack thereof.)  I really oughta train them to make coffee and pour bourbon.  Ah, hell, best to let sleeping dogs lie.  They really love the winter sunlight angling in from over Mount Milner.


I can't forget ole Buck.  Here he is napping in my trailer when the four of us were holed up in the Arizona desert a few winters back.  He passed away a year ago last August 18th, age 13 (cancer, just like his old man, Old Shep) and we all miss the hell out of that feller.  Occasionally, I still dig up his old beef bones in the flowerbeds...as do Thor and Stella. 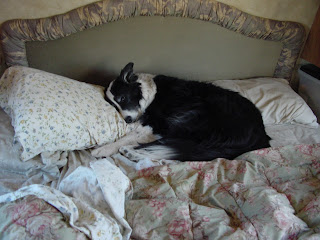 The Last Ride of Jed Strange by Frank Leslie 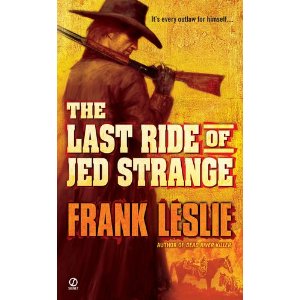 Frank took some time off from his love affair in Europe with a bullfighter's girl to pen this one at the home of a Swedish princess on the island of Capri off the coast of Italy--at least when his friends Kate Hudson and Angelina Jolie weren't calling him back to parties in Aspen, which he of course is the life of.

There are no known pictures of Frank Leslie, so I thought I'd post one of someone who looks a lot like him though a tad less handsome. 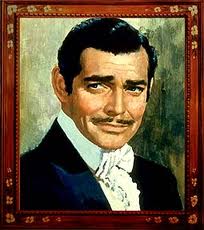 Anyway, here is an excerpt of the book the wild old coyote channeled to me sometime last year.  It's from the beginning of the fifth chapter of the book, the first copy of which I just received from Signet.  The official publication date is January 3 but it should be in the book stores in a week or two.  I hope you'll all buy a copy, for while Frank doesn't need the money, me and my critters do!

From THE LAST RIDE OF JED STRANGE/Frank Leslie (Signet, Jan. 2012)

Colter must have passed out.
All he knew was that time seemed to skip ahead until he was looking around and realizing that both McKnight and Hobart were gone, and that Pres Belden lay on the ground nearby, flat on his back near the wagon’s open tailgate.  Something dark was dripping off the end of the tailgate and pooling on the ground below it, beside Belden’s head.
Then Colter realized what had drawn him up out of shallow unconscious--the trilling of spurs and the thudding of boots moving toward him fast.  He’d know the skip-scuff shamble of Willie Tappin anywhere.
“Colter, what the...?”
Colter groaned and lifted his head, trying to push himself up to a sitting position against the searing pain in his ribs.  As Willie approached dressed in buskskin pants, boots, and underwear shirt with an Army blanket thrown over his shoulders, Colter gave up and rolled onto his left hip, spitting more blood from his lips and casting his gaze toward where Belden lay unmoving near the wagon’s open tailgate.
Willie slowed his pace and stooped to place a hand on Colter’s shoulder but then, seeing the dark hump of Belden, he stepped over Colter and continued on over to the wagon.  He dropped to a knee and placed a hand on the Lieutenant’s throat then glanced over at Colter.  “Dead.  By the way he’s layin’ I’d say his neck’s broke.”
Colter blinked, just now beginning to comprehend what had happened.  He’d caught the Lieutenant off balance and kicked him off his feet.  His head had slammed into the tailgate as he’d gone down.  The crunching sound had been Belden’s neck breaking.  The realization slowly gathered steam in Colter’s head.
Belden was dead.  Colter had killed him.
“I got up to take a piss,” Willie said, walking back over to Colter, “and I’d just stepped out of the bunkhouse when I seen two soldiers running off toward the fort, like two donkeys with tin cans tied to their tails.”
“McKnight and Hobart.”
“Colter, what for the love o’ Jehova happened out here?”
“I got the shit kicked out of both ends.”
“I see that.”
“Somehow, I managed to give that son of a bitch one helluva a mule kick, and”--Colter leaned on an elbow and fingered his chin, still trying to remember and work it all through his mind--“and beefed the bastard.”
“Well, beef is what he is, all right.”  Willie stared in awe at the dead lieutenant then dropped to a knee in front of Colter.  “How bad you hurt?”
“I feel like I still have one of his boots up my ass.”
“You look like a bobcat done tried to drag you off down the wash for supper.”
Willie stared toward the main fort across about a hundred yards of desert bristling with rocks and catclaw.  The adobe brick buildings sat slouched and ash-colored in the moonlight.  The Colonel’s house was at the far right end of the parade ground--a big Victorian affair that looked as out of place here on the Arizona desert as would a peacock in a chicken coop.  No lights were on there, either.
Willie said, “And you’re gonna look a lot worse if you don’t get the hell out of here.” 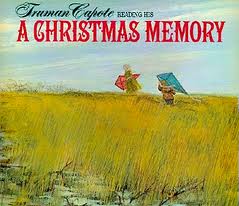 I first read this Christmas story by Truman Capote when I was in the 6th grade in Central Junior High in Wahpeton, North Dakota.  For some reason, while I was rereading it today, I kept smelling grape bubble gum.  After some thought I remembered why.  The classroom in which I first read it, one cold December in the 70's, had one of those big old radiators to which we students used to love to stick our gum and watch it dribble down the sides while filling the air with perfume.

Anyway, this was one of those first stories I read that made me want to become a writer.  It's incredibly rich, vivid, and haunting, with a conversational, captivatingly rhythmical voice that takes you into the quiet story of the seven-year-old Capote and his much older but beloved Cousin Sook preparing for Christmas.  No one can equal the mesmerizing voice of Capote, or his skill with gritty, cinematic details, and he showed that even in a book that couldn't be more different from this story--In Cold Blood.

This story is about love and innocence without the intrusion of the outside world to take away the magic of pure love and the true meaning of Christmas.  And after I first read it all those years ago, I went down to the Carnegie Public Library in Wahpeton to find everything I could by this fella who could tell a story so richly and movingly.  All I could find was a worn copy of Breakfast at Tiffany's, and I still remember the brow the elderly librarian lady arched at me as she stamped the book's back with the due date.  I read the whole book over that Christmas vacation, and while this one was nearly as much of a departure from "A Christmas Memory" as Cold Blood was--and I doubt I really understood what was going on at that age of 12--I loved the voice and the images Capote conveyed.  And deep in my heart, on an intuitive level, I think understood Holly Golightly's loneliness, her love for lost souls and animals, and her need to escape any and all tethers while at the same time needing so desperately to belong.

I didn't know until later that Truman Capote was that small, pale, ridiculous-looking man on all the talk shows during the 70's, slurring his words and wearing big womanish hats and smoking from a long, black cigarette holder.  I still can't quite reconcile that man to the one who wrote "A Christmas Memory" and "A Thanksgiving Visitor"--or even Breakfast at Tiffany's, for that matter--but I do remember feeling bad for him and wondering why, in my young naive way, Dick Cavette and Johnny Carson kept having such a brilliant but obviously  flawed man on their shows drunk and making a fool of himself.  I just hoped, in that same naive way, that at least a fraction of the people watching had read his work and knew who he really was.

Truman Capote, long dead now, has had the last laugh.  And he'll keep on having the last laugh, because his work has and will survive.  Hell, I reread "A Christmas Memory" today and found even more to love about it than when I first read it nearly forty years ago.  And just thinking about Dick and Perry in In Cold Blood makes me quicken my steps when walking up from my basement at night.