Mean Pete and Bad Buddy Head for the Hills! (And Bloody Arizona Book 2 is live on Amazon!) 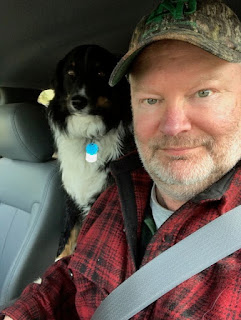 Having finished Book 2 in my Bloody Arizona Quartet featuring Yakima Henry, the staff of Mean Pete Press takes the day off and heads for the hills... 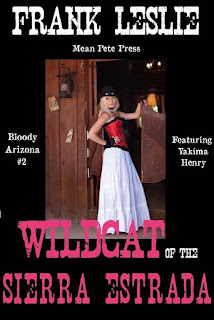 Here's a sneak peek at the second book in my Yakima Henry Quartet, which is all but finished and should be up and running on Amazon by this weekend or early next week. (Keep in mind that "the Kid" mentioned here is a paunchy, middle-aged old reprobate still wearing the moniker of the Rio Grande Kid, thereby clinging to the former "glory" of his outlaw years...) 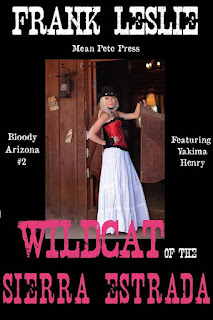 The Kid checked his mount down off Yakima’s left stirrup, matching Yakima’s pace. Emma checked her buckskin down off his right stirrup, also matching the half-breed’s pace.
“I was listening for gunfire,” Yakima said, “thinking you two might shoot each other back yonder. It’s a wonder what gold will do to you.”
“We came to an agreement,” the Kid said tightly, staring straight over his horse’s twitching ears.
“Well?” Yakima said when neither one elaborated.
“We agreed that I wouldn’t shoot him if he left that gold alone,” Emma said, looking past Yakima at her newly minted nemesis, the Kid.
The Kid turned to Yakima, his eyes indignant beneath the brim of his battered Stetson. “I think she woulda done it, just like she said. She woulda gut-shot me an’ left me there to bloat up an’ rot with her old man’s gun wolves!”
Emma winked at him. “My trigger finger is still itchin’.”
The Kid said to Yakima, “She’s purtier’n a speckled pup, Miss Emma is. But I’ve come to believe she’s meaner’n back alley cur with fourteen sucking pups!”
“When it comes to that gold, you better believe it,” Emma agreed.
“What’s the plan?” Yakima asked her. “You going to hounddog him for the rest of his days to make sure he doesn’t ride back out to that canyon?”
“If that’s what it takes.”
“What about you, Yak?” The Kid studied the half-breed lawman, puzzled. “Don’t you want none o’ that gold?”
“Nope.”
“How come?”
Yakima hiked a shoulder. “Believe me, when I first saw that church, I felt the fever. But how would you ever get that treasure out of that canyon without every seedy-eyed border snake in Arizona getting word and running out here to ‘help’? No one could ever be satisfied with only an ingot or two. You’d want the works or you’d never sleep at night.”
He spat over the side of his saddle, and chuckled. “Anyone tries hauling that gold out of that canyon is going to go up against an army of desperadoes intent on relieving them of it. Shit, there’ll likely be a war that’ll make the Misunderstanding Between the States look like a game of schoolyard kickball. Besides, look what that gold has done to you two.”
Yakima looked from the Kid on his left to Emma on his right. “An upstanding deputy town marshal and Hugh Kosgrove’s purty, polite daughter goin’ at each other like a wolf and a mountain lion trapped in the same privy. You two oughta be ashamed of yourselves.”
“It’s not the gold I’m after,” Emma said, defensively. “What I’m after is keeping the gold in the church in that canyon—where it belongs!”
“What do you think, Yak?” the Kid said after they’d ridden in silence for a while, the sun really burning down on them now at nearly midday, not a shadow in sight. “Do you believe that gold is really cursed like this purty wildcat says it is?”