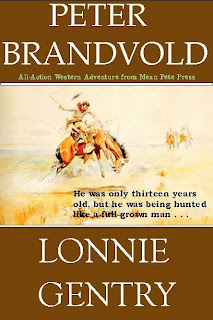 I haven't had time to post much here lately, as I've been too busy writing books.

Last month I finished a 72k-word western that can be enjoyed by readers of all ages, including young'uns.  LONNIE GENTRY is about a 13-year old cowboy who's been instructed by his mother, whose boyfriend is an outlaw, to take a cache of stolen money over the Never Summer Mountains to the deputy U.S. marshal in Camp Collins, Col Terr.

(While doing so, Lonnie rides right past Mean Pete's lair on the side of Mount Milner, though about 150 years too soon to come in for a cup of coffee...)  This poor abused boy...and a girl he's sweet on but who's two years older and who is also the daughter of a sheriff the outlaws killed...are hunted without mercy through the mountains by Lonnie's mother's wicked beau, Shannon Dupree, and his two partners, Fuego and Jake Childress.

I think it's a romping good read, and fans of my books should like it as much as anything else I've written.  Because it's told from young Lonnie Gentry's point of view, and it doesn't have as much cussin' in it and is generally a PG13 book--Mean Pete really had to bite his tongue when he was hammering this one out!--younger readers and those with slightly more delicate sensibilities than old Mean Pete's should find it right palatable, as well.  But, believe me, while Mean Pete's nastiness is tempered here, that don't mean the yarn don't have bucketfuls of grit!

I was going to publish the book myself in ebook form and in print form through Amazon, but I've decided to turn it over to Five-Star, part of the Cengage/Gale Company out of Maine, who's been printing my other books in large print for years.  I love Five Star's books, and they'll put this one out in hardcover, softcover trade, and in large print as well as digital.  The reason I haven't been pursuing mass-market contracts lately is because digital sales have been consuming the mass paperback market, so I think Five-Star is the way to go.  Besides, the acquiring editor there, Tiffany Schofield, is one hell of a straight-shooting gal, and I've enjoyed working with her. (How can you not like a woman with the name of one of the most popular guns in the Old West?!)

(The cover above is my own mock-up, which I made when I was still going to self-pup, and will not be the cover that Five Star uses.)

I'm not sure when LONNIE will be out--probably in a year or so--but you can look for it in several different formats, and you can bet the cover will be killer!  Nothing puts a smile on Mean Pete's ugly mug like a fresh beer, a loose woman who's buyin' the drinks, and a killer cover!

Now I'm about halfway through a new Ben Stillman novel, which I hope Five-Star will also publish.  It's my fist Stillman in about 10 years, and it's called ONCE MORE INTO THE BREECH.  Ben Stillman's family has grown, and an unwanted visitor with a hook arm has come to Clantick...  I think it's pretty good...though it may not be suitable for younger readers.

I leave this update with an excerpt from LONNIE GENTRY:

“Hey, Squirrel!” intoned Shannon Dupree, who rose from the near end of the table, where Lonnie’s mother usually sat.  His wet, longish blond hair showed the lines of a comb, and he wore a checkered oilcloth bib tucked into the collar of his red-and-black plaid work shirt.  He also wore a pistol on his hip.
“How you doin’, Squirrel?” Dupree said, turning to Lonnie and punching him twice lightly in the belly.
They were soft punches but in Lonnie’s mood, and in light of his feelings toward the outlaw, they might as well have knocked the wind out of him.
“Come on, kid,” the outlaw persisted, feinting like a boxer and wagging his big, red fists in Lonnie’s face, swiping at his chin.  “Come on!  You got some sand, don’t ya?  Let’s see what you got, Squirrel!”
Lonnie exploded, and though Shannon towered over him, well over six feet tall, the boy lurched forward and drove both his fists into the big man’s hard, flat belly.  It was like hitting a side of beef hanging in the keeper shed.
The big man roared with glee, blowing his sour whiskey breath.  “There ya go, Squirrel.  Don’t take nothin’ off’n nobody.  Hah!”  But then he bent down, wrapped his arms around Lonnie’s waist and picked him up as though the boy weighed no more than a bucket of water.  Suddenly, Lonnie felt his boots rise up over his head and he was now upside down and facing the open front door, punching only air.
Fury boiled even harder.  Fury fueled by helplessness and humiliation.  Then he heard himself sob and his fury doubled.  Upside down, Lonnie screamed above Dupree’s loud guffaws, “You go to hell, you gutless, raggedy-heeled, outlaw sonofabitch!”
Dupree stared down at Lonnie.  Lonnie glared up at him.  Then Dupree opened his arms, dropping Lonnie straight down to the floor.
Lonnie’s mother screamed, “Oh, Shannon!”
Lonnie hit the floor on his shoulders, the back of his head taking a glancing blow.  And then he was on his back, gasping, trying to force air into his lungs.  He wasn’t on the floor long, however, before Shannon Dupree, his long, slanted, gray, demon’s eyes looking flat and dead and mean as a rattlesnake’s, reached down and picked Lonnie up and threw him up against the wall between the window and the door.
The eerie, menacing flatness in Dupree’s eyes told Lonnie that he was about to die.
at September 21, 2013 2 comments: