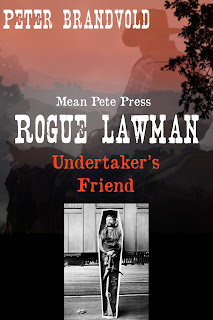 From the king of the hard-driving, fast-moving, sexy western...

Gideon Hawk shoots three men who try to rob the saloon he’s drinking in. One of those men is the spoiled son of a local rancher, Mortimer Stanley. The rancher doesn’t take kindly to Hawk’s killing his son despite the crime his son was committing.

When the rancher sends five men into town to kill Hawk, and Hawk turns them all toe-down, dead as stones, war clouds gather over the little prairie town of Cedar Bend.

Waiting for Stanley to make his next move, Hawk sees that Cedar Bend needs some cleaning up. He takes the badge of the corrupt town marshal, Roy Coates, and pins it to his own shirt. Coates doesn’t take kindly to that. He tries to bushwhack Hawk and gets a whipping for his trouble. Coates crawls home, where he swills whiskey, licks his wounds, and stews.

What makes Coates even owlier is the fact that Coates’s wife, Arliss Stanley, the daughter of the rancher, Mortimer Stanley, finds herself profoundly, primitively attracted to the tall, fearless stranger with the jade green eyes set against the severe Indian features of his war chief father. She finds herself a slave to her own passions as well as to Hawk’s.

She also finds herself caught in a whipsaw between her husband, her father, and the man they both want dead at all costs.

Explosive forces inevitably converge to affect the rogue lawman’s demise. When the smoke finally clears over Cedar Bend, if the rogue lawman is still alive, he’ll likely discover that one of his only remaining friends is the local undertaker, who whistles while he works and laughs all the way to the bank...

A Snippet from the Next Rogue Lawman--Undertaker's Friend 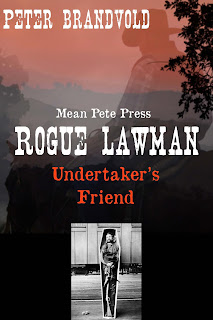 [The next Rogue Lawman novel will be out in about a week. Here's a snippet!]

Mortimer Stanley walked over to stare down at Roy Coates, whose feet were tied to his stirrups. Coates’s bound wrists were tied to his saddlehorn. He was slumped against the horse’s right wither. He didn’t appear to be conscious. Maybe not even alive. Stanley couldn’t tell if his son-in-law was breathing.
“Go around there and cut his foot out of that stirrup, Red Wolf.”
When the big Indian foreman walked around to the other side of the horse, Stanley used his own folding Barlow knife to cut Coates’s right boot free of its stirrip. Together, he and Red Wolf cut the ropes binding the town marshal’s hands to the saddlehorn. When the final strands broke, Stanley stepped back quickly as Coates tumbled out of the saddle to hit the ground with a dull thud and a faint groan.
He lay on his side, stretching his lips back from his blood-frothed teeth.
Stanley kicked the man onto his back.
“What in tarnation...?”
Coates’s face was a bloated mess. It looked like a cut of meat that had been left outside to rot in the sun and to be nibbled on by predators. The marshal opened his eyes, blinked.
“Coates?” Stanley said. “You worthless piece of shit.”
Coates stared up at him for a time. Then Stanley wasn’t sure if it was a pain spasm or a slight grin that tugged at the man’s battered, swollen lips, but he had a feeling it was a grin. Coates swallowed, tipped his head back a little. It was a gesture for Stanley to bend an ear.
The rancher got down on one knee and lowered his head within a foot of the marshal’s mouth. “What is it? Get on with it. You don’t got much longer on this side of the sod, Roy.”
Coates opened his mouth, spoke too softly and gravelly for Stanley to understand.
“What? Speak up, goddamnit,” the rancher intoned. “I can’t hear you!”
Coates made some more sounds. Stanley cursed and lowered his ear to within six inches of the man’s mouth.
Coates raked raspily out: “She’s fuckin’ him. Arliss is...”
Stanley jerked his head with a start, turned to glare down at the marshal smiling up at him. Coates blinked slowly. A little more loudly, he said, “He said to tell ya...you’re makin’ the undertaker a happy man.”
“Oh, he did, did he?” Stanley said, pushing with a grunt off one knee, straightening. “Roy, you’re a worthless mound of dog dung—you know that?”
Coates only smiled up at him, in a dreamy near-death state.
Stanley pulled his pistol, clicked back the hammer, aimed down at Coates’s head, and blasted a hole through the man’s left temple. With the pistol’s roar, the horse whickered loudly, leaped off all four hooves, turned, and galloped off down the hill toward the corral.
Stanley clicked his Colt’s hammer back and shot the town marshal again. Coates’s head turned sharply, as though he were obstinately disagreeing with Stanley’s assessment of things. More frothy blood sputtered on his lips, like hot butter in a skillet, and then he gave a couple of feeble death jerks and lay still.
Stanley turned to Red Wolf standing beside him. “Send every last man I got. Tell them if they don’t kill that man in town...that Gideon Hawk, Rogue Lawman character...to not bother comin’ back here. They will not be given their final paychecks.”
Red Wolf gave a single, resolute nod then started retracing his steps back down the hill.
“Hey?”
The foreman stopped, glanced back over his shoulder at Stanley.
“You stay here. In case he gets around ‘em.”
Red Wolf gave that purposeful nod again then continued down the hill.
at March 09, 2016 No comments: 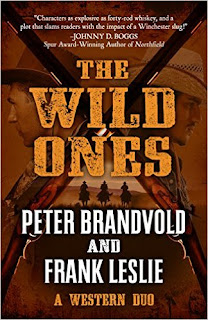 ALL NEW FROM THE CURRENT KING OF THE SEXY, HARD-DRIVING, FAST-MOVING WESTERN ADVENTURE!

When Sheriff Ben Stillman’s deputy and best friend, Leon McMannigle, shoots a young woman who was about to shoot Stillman in the back, Leon takes the outlaw girl’s lifeless body back to her mountain ranch to turn her over to her family. He feels the need to explain himself, to personally account for the girl’s death.

His explanation falls on deaf ears. Old Watt Hollister sends his wild sons led by his eldest boy, Nash, out on the trail to exact revenge for their poor dead sister. Wounded, McMannigle is alone and on the run in the Two-Bear Mountains, hunted like a calf-killing mountain lion!

Ben Stillman isn’t at all happy when he gets wind of his friend’s fate. In fact, when you mess with Stillman’s friends or his family, it’s damn well guaranteed you have all-out war on your hands.

ONCE AGAIN, ALL HELL IS BREAKING LOOSE ON THE HI-LINE!

BLOOD TRAIL OF THE HORSETOOTH WIDOW
By
FRANK LESLIE

When the drifting half-breed, Yakima Henry, stops in the little town of Horsetooth for a drink to cut the trail dust, he ends up killing a saloon owner and bedding the dead man’s beautiful wife.

But it turns out that the lovely Paloma already had a lover—one who’d just robbed an Army payroll and after being scalped and blinded in one eye by Apaches, hid the loot somewhere in the Chiricahua Mountains. And she wants Yakima to help her find it.

CHECK IT OUT AT AMAZON