By Frank Leslie, author of the Yakima Henry and Colter Farrow novels...

Some fool sheriff tried to jail Yakima Henry for a crime the half-breed did not commit, and got a bullet for his trouble.  Now Yakima has some trouble of his own--three bounty hunters tracking him across the Jornada del Muerta, on a wild ride to the border.
Yakima just has to get through Skull Canyon and across the Rio Grande.  Then he’ll be free in Mexico.

But a beautiful Mexican woman named Magdalena, who runs the Gate of the Canyon Saloon, warns him to steer clear of the canyon.  Yakima accepts an invitation to Magdalena’s warm bed.  He should have heeded her warning about Skull Canyon, too.

Because now he’s not only got three bounty hunters to contend with but some specter with a little-girl scream, stilettos for teeth, and breath that smells like death... 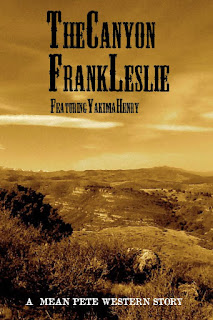 1.
An autumn wind blew chill and dry out of Mexico, moaning like the ghosts of the long-dead conquistadores, as Yakima Henry reined his sweat-lathered black stallion off the side of the trail and into bright-yellow leaves raining from giant cottonwoods and spindly sycamores.
The big half-breed leaped swiftly down from his saddle and reached into a saddlebag pouch for his spyglass.
“You stay, Wolf,” Yakima said, running a hand down the black’s sleek neck.  “I’m gonna have a quick look-see at our back trail.  If we’re far enough ahead o’ them coyotes, we’ll camp soon.  Me--I’m so hungry, my belly’s been gettin’ way to friendly with my backbone.”
The stallion snorted, blew, twitched his ears.
“That the way it is for you, too, hoss?  Well, don’t worry--we’ll strap on a feed sack soon.”  Yakima patted the white, Florida-shaped blaze on the horse’s snout as he looked at the jutting stone pinnacles and monoliths lining the deep canyon around him.
He picked out one, and started to climb as the bright leaves continued to rain.  He’d donned his desert moccasins, and pulling with his muscular arms and pushing with his powerful legs, the bearclaw necklace dangling from his thick neck, he easily, swiftly climbed to the top of the jutting finger of rock.
At the top, he hunkered low, swept his long, coal-black hair back from his face, and raised the glass to his right, jade-green eye.  He twisted the canister, adjusting the focus.  It took him nearly a minute, but as he stared east along his backtrail, he picked up a faint ribbon of dust lifting between two distant buttes.
Yakima lowered the spyglass, reduced it, and continued to stare east along the rocky canyon and toward the desert flat beyond--the ninety-mile stretch of hot, dry, featureless stretch of Jornada del Muerto he’d traversed on his way to the border, a small passel of American bounty hunters stubbornly shadowing his every move along the El Camino Real.
He turned to stare up trail, toward the misty, blue-green reaches of Old Mexico.  Not far now.  Another day’s ride and he’d ford the Rio Grande at Robedo Crossing, south of Apacheria.  Another day’s ride beyond, and he’d be in Mexico.  The hunters wouldn’t follow him across the border.
Once in Mexico, Yakima would find a pretty, brown-eyed senorita and shack up for the winter along the Yuma River, or maybe on the shores of the Sea of Cortez.  He’d take a break from trouble for a while.  He could do with a soft breast for a pillow at night.
Guilt prodded him.  He turned his gaze to the northwest, as though he could see Bailey Peak in the Arizona Territory from this distance of several hundred miles, and the grave he’d dug there years ago.  But whenever he thought of her he felt as though he’d buried her only yesterday.
Faith...
The big half-breed in worn denims with patched knees, and a skin-tight, sweat-soaked buckskin shirt, shook the reflection aside.  Too easy to get caught up in what might have been if the gods hadn’t frowned.  Time now only to ride, find water and a place to bed down for the night, head for the Rio Grande again at first wash of dawn.
He dropped down the side of the stony pinnacle, leaped the last few feet to the ground, swung toward his horse, and stopped.  He lurched back with a start, his right hand automatically reaching for the horn-gripped .44 holstered low on his right thigh.
Then he caught himself.
“Shit,” Yakima said softly.
He stared down at the dead man he somehow hadn’t seen before.  A skeleton with only a few ragged swatches of clothes hanging off his sun-bleached bones.  Both skeletal hands were wrapped around the Castellani saber that had shattered his breastbone and pierced his heart, which was no more than a few fingers of dust lying against the ribs curving around his back.
Skeleton and saber were all that remained of some long-forgotten battle waged here just east of the Rio Grande.  The dead man had probably been a bandit, possibly an Apache, who’d attacked a Mexican trade caravan headed north to Santa Fe, and got a saber through the heart for his efforts.
Yakima wrapped his hand around the sword’s gilt handle.  A fine piece.  Crusted with the dirt and grit of the ages, but fine, just the same.  It had likely been forgotten in the heat of battle.
The half-breed released the handle.  Bad luck to steal from the dead.  Besides, he didn’t want the extra burden.  He and Wolf were still a long way from the senoritas.
Yakima returned the spyglass to his saddlebags, grabbed the reins, and swung into the leather.  He turned Wolf back west along the trail, heeled the stallion into a trot.  The sun was angling down quickly behind the darkening San Mateos.  He needed to find a place to camp soon.  With its thorny thickets, its maze of sierras, barrancas, and sudden, rocky arroyos, this was no country for night travel.
He and the horse clomped another narrow trace for another forty-five minutes and then, when the trail had risen gradually out of the canyon and into a high, broad, expansive basin ringed with distant, knife-edged, purple peaks hunkered low against the horizon, he once again drew Wolf to a stop.
Before him lay a town.

Catch the rest soon at Amazon and Barnes & Noble!

Mean Pete's Getting Scary This Halloween... 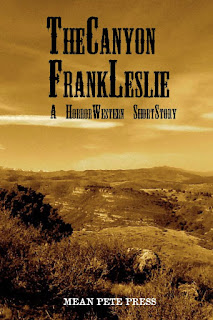 The first book in the popular .45-Caliber series featuring Cuno Massey will be up and running soon for both Kindle and Nook!  This is a reprint of the original paperback published by Berkley about eight or so years ago.  I wrote a movie script for this book and while it's come close to getting made, it still hasn't cleared the final hurdles.  Here's hoping it will within the next year...

Isn't that a great title?  It's the title of a book of terrific poems by Hayden Carruth, who I started reading many, many years ago--probably when I was in high school and stumbled on Carruth's stuff when I was prowling the public library in Grand Forks, North Dakota, as I did habitually and compulsively.

I've been reading Carruth off and on ever since, and a couple years ago I picked up SCRAMBLED EGGS & WHISKEY.  I've been reading and re-reading the poems in it every night lately, just as I did last year around this same time.  I have no idea why I've been reading him in the early fall, but I have.  Maybe this is the best time for good poetry.  A good, wool-gathering time of the year.

Hayden Carruth...one of the great writers of the past century and then some.  I salute him here for all the years I've considered him my own, which is the highest compliment any reader can pay any writer. 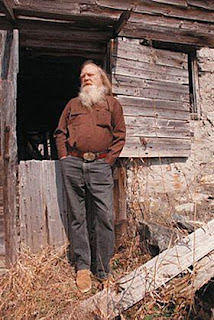 QUALITY OF WINE
BY HAYDEN CARRUTH
This wine is really awful
I’ve been drinking for a year now, my
retirement, Rossi Chablis in a jug
from Oneida Liquors, the best
I can afford. Awful. But at least
I can afford it, I don’t need to go out and beg
on the street like the guys
on South Warren in Syracuse, eyes
burning in their sockets like acid.
And my sweetheart rubs my back when I’m
knotted in arthritis and swollen
muscles. The five stages of death
are fear, anger, resentment, renunciation,
and –? Apparently the book doesn’t say
what the fifth stage is. And neither
does the wine. Is it happiness? That’s
what I think anyway, and I know I’ve been
through fear and anger and resentment and at least
part way through renunciation too, maybe
almost the whole way. A slow procedure,
like calling the Medicare office, on hold
for hours and then the recorded voice says, “Hang up
and dial again.” Yet the days
hasten, they
go by fast enough. They fucking fly like the wind. Oh,
Sweetheart, Mrs. Manitou of the Stockbridge Valley,
my Red Head, my Absecon Lakshmi of the Marshlights,
my beautiful, beautiful Baby Doll,
let the dying be long. 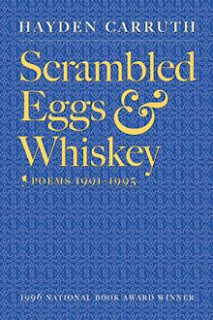 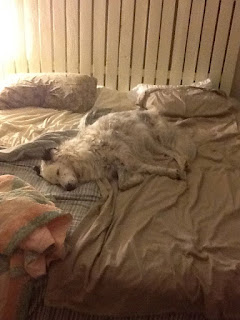 How can one three-legged mutt take up an entire bed?

Well, that's Thor.  And there used to be three more just like him and a cat named Bill, as well.