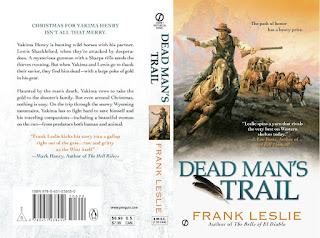 Signet recently sent me the cover for my next Yakima Henry novel, which will be out after the next novel under the Leslie name--BELLS OF EL DIABLO (July).  BELLS is the first book in what I hope will be a new series about Confederate treasure hunters in the old Southwest.  DEAD MAN'S TRAIL is a Christmas book, inspired just a tad on the old Walton's Christmas Special, THE HOMECOMING.  But just a tad.  Think John-Boy Walton meets Sergio Leoni.

I'm going to post the first chapter of the BULLET FOR A VIRGIN story this week.  It's finished but I've had to put everything on the back burner to write a "house book" ASAP.

Till then, Happy Trails!

Mean Pete (His Own Mean An' Nasty Se'f!) 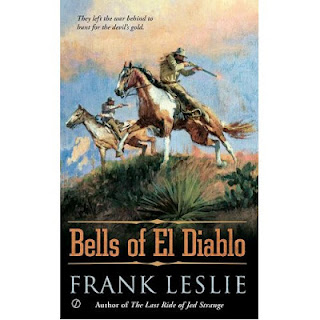 The Bride Rides for Revenge! 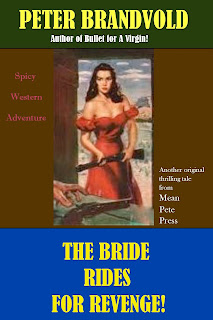 Here's a sneak cover preview of the second story in the Spicy Western Series from Mean Pete Press.  The first one features my recurring character, the Rio Concho Kid, while this second one introduces my right capable heroine, Delilah Lord.

I'm about half done with BULLET FOR A VIRGIN! and will post a preview tomorrow.  Try to sleep after hearing that, Buckaroos and Buckarettes!

Bullet for a Virgin! 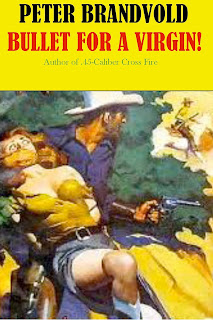 As I've been threatening to do for a while now, Mean Pete Press is in the process of writing and publishing exclusively for Kindle an ebook series of pulp-style westerns.  I'm writing a string of "spicy" western short stories, no longer than ten-thousand words each.  I was inspired by the western pulp collections that the great Tom Roberts has published with his Black Dog Books, especially Lust of the Lawless by Robert Leslie Bellem.

These stories will be sort of an homage to those and, I hope, entertaining yarns in their own right, with a slightly more contemporary, sexy edge.

I'm currently working on the first one, "Bullet for a Virgin."  I hope to have it up within the next two weeks.

Once More With A .44 Now Available from Mean Pete Press

My second Ben Stillman book, originally published in 2000, has just gone up on Amazon from Mean Pete Press.

It should be available at B&N for Nook on Monday, the 9th of April.

This one follows ONCE A MARSHAL, the sales of which have been surprising for an old book--my first, in fact.  If ebook sales continue as thus, I'll be bringing a completely original series the E-way soon.  Why the hell not?

Mean Pete His Own Nasty Se'f is currently working on getting the next book in the Ben Stillman series up and available as a cheap ebook, and is working on another Lou Prophet book with the working title of THE DEVIL'S HALF-OUNCE (which refers to an evil dwarf named Mordecai Moon).

In the mean time, Mean Pete intends to head deep into the Mummy Range soon to pitch a tent and write where the only interruptions are those of the mountain jays pecking at his jerky pouch.  Have to get the ole Ranger serviced first, and hit the beer sales!