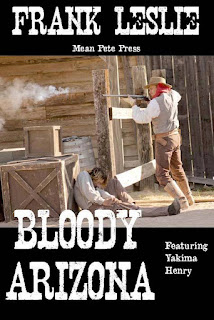 SADDLE UP FOR A HARD RIDE WITH THE HALF-BREED DRIFTER, YAKIMA HENRY, IN A BRAND-NEW FOUR-PART SERIES...BLOODY ARIZONA!

Yakima Henry is holed up in an old prospector’s cabin in the wilds of south-central Arizona, between Tucson and Lordsburg, New Mexico. He’s decided to cool his heels until fall, prospecting for gold and hoping for a little color with which to fund a trek into Mexico.

It’s always nice crossing that southern border. It makes him feel like a brand new man. Makes him forget, if only a little, the horror of laying his life’s one true love, the beautiful Faith, to rest in that unmarked grave near Thornton’s Roadhouse in Colorado...

The half-breed wanderer just can’t shake Faith’s memory, however. Not even with the help of the firewater and pretty whore in the Busted Flush Saloon in the little nowhere town of Apache Springs. In fact, the firewater causes the crazed, jade-eyed half-breed to go into a rage and bust up the saloon and half the men in the town until he’s finally subdued and carted over to the local jail—locked up by his friend, Town Marshal Lon Taggart.

THE HALF-BREED PINS A BADGE ON HIS SHIRT...

Yakima’s life gets even more complicated when four strangers ride into town and shoot Taggart while Yakima is locked up in the lawman’s jail. They would have raped Taggart’s wife and burned the entire town to the ground if Yakima hadn’t shot his way out of the jail cell, and intervened.

Now Taggart’s wife calls on Yakima to wear her husband’s badge and go up against a kill-crazy, vengeance-hungry ex-mining engineer, Rebel Wilkes, who sent the men to burn the town and who will surely send more. Wilkes has it in for the town, which refused to sell him access for a spur railroad line, thus ending Wilkes’s dream of developing a mine in the area and, worse, causing him to lose his shirt as well as his pride and reputation.

For Wilkes, Apache Springs must die. His ex-lover, Julia Taggart, as well.

But Julia has become Yakima Henry’s lover now. So Wilkes’s grudge against Apache Springs is personal. So personal, in fact, that the sleepy little desert town will soon become a powder keg of raw emotion and hot-flying lead!