Why I Brew Beer 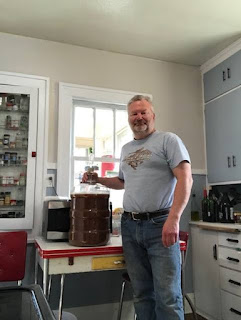 The author with a fresh batch of beer

I brew beer for the same reason men and women have been brewing beer since they started pounding on tom-toms and genuflecting before the sun gods—because I like the taste of a good, heady pail of suds. Aside from a little slap ‘n’ tickle on a hot August Saturday night with the radio turned low, you just can’t beat a good beer buzz. It’s almost as much fun as wrestling pterodactyls.

Brewing beer probably wasn’t as enjoyable back when men and women had so many other tasks on their calendars, like killing supper and holding the wolves at bay. It was probably just another damn thing they had to do. A necessary one if they relied on beer because they couldn’t trust their water, as was the case for some civilizations. No, really!

Of course, for me brewing beer is a hobby. Like most hobbies there’s the obligatory explanation that it distracts me from my day job—writing—and helps me relax. That’s a somewhat spurious notion for me, however. I’m one of those rare, enviable schleps who loves his day job. Writing for me is fun and relaxing, and there’s the added benefit that the occasional paycheck helps hold the wolves at bay.

I like brewing beer because I relish the complicated simplicity and the long elemental tradition of the age-old task. What is more basic and natural than scooping up a handful of malted barley, giving it a good sniff, drawing that malty aroma deep into your lungs, then dropping it into the converted meat grinder and churning up the grain so that the bouquet grows even more sweet and lush as the finely ground hulls and kernels separate and drop into the bucket below the funnel spout? 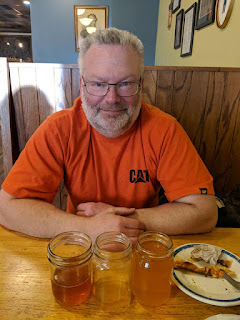 The author with a few beers

That grainy tang is right out of my fond childhood and teenage memories of late July grain harvests back on my grandfather’s farm in North Dakota. It’s akin to the memory-loaded smells of lilacs in a country cemetery, the greasy tang of old cars, and the Magic Marker and chalk-and-varnish scent of old schoolrooms. (I don’t know what schoolrooms smell like today; do computers have an odor?)

Beer brewing is addictively simple yet complicated. In a nutshell, you grind the grain, add water, stir, boil, throw in some yeast and hops, let sit, and—voila!—you’re in the suds! Take it from me--any idiot who flunked seventh-grade algebra and whose girlfriend had to get him through physics can do it. The complication, and thus the fun, arises when you start experimenting with different grain combinations and hops combinations, different mashing temperatures, and when you decide you want to brew beers from different eras. I love researching old recipes to find out what kind of beer, say, Thomas Jefferson brewed and quaffed. (He added corn to his favorite ale.)
Because I’m a Midwesterner and in love with all things good ole Middle American, I once tracked down an early recipe for Pabst Blue Ribbon, and gave it a try. It was much better than the weak tea version of beer that that once-regal company is brewing these days, I tell you. It was once thick and rich and so malty that taking that first sip was like diving into a combine hopper in late July!

Another reason I enjoy brewing beer is because, since I’m solitary most of the time, as most writers are, it provides an opportunity to mingle with like-minded friends who also like to brew beer. My rundown garage has not only become a brew barn but a metaphorical gazebo on the proverbial town square, where I and two others guys—both of whom I’ve known for over twenty years and one of whom I’ve known since we were in the fifth grade together—can grind and boil and stir, rib and kid, meander down shared memory lanes (we all grew up in the wilds of North Dakota in the 60s and 70s) and swap recipes as well as more than a few tall tales.

Which is no doubt what most folks have been doing while brewing beer since we were hoofing it after mastodons. 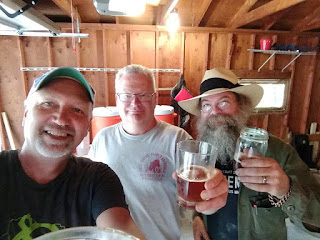 The author with his brew pals (l to r), Kent Quamme, Bill Schmidt 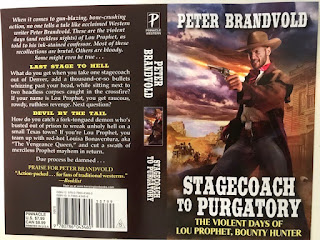 Sign up for the Goodreads Giveaway of my new mass-market paperback Lou Prophet novel due out next month from Pinnacle...This book is two 50k word Lou Prophet novels in one. Each I published briefly as ebook originals but when Pinnacle asked if I could send them a book fast to fill a hole in their schedule, I took those two ebooks off Amazon and put this single volume together. The books are framed by a fictional introduction by an old, ink-stained newsman who got to know Lou when Lou, in his later years, had gone off to California to consult for the "flickers," the silent movie westerns, and ended up driving off a road above Malibu in a car filled with starlets and moonshine. He lost a leg. He's old and tired and he's living in the Odd Fellows Home of Christian Charity, but still has enough vim and vinegar to recount tales of his past life as a bounty hunter in the old West...

CHECK IT OUT HERE

And, by the way 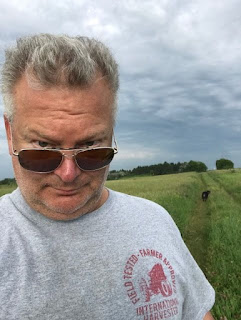