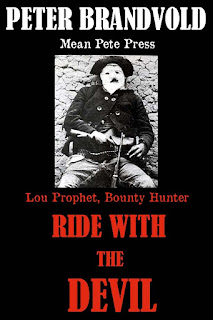 I'm about 40,000 words into my next Lou Prophet novel, which means I'm around 10k words from the end. In this one, Lou and the Vengeance Queen split up to follow a gang of kill-crazy cutthroats who have also split up as they journey through the Spanish Mountains, heading toward Mexico. While Prophet shares the trail with one of the killers, Jack Flood and his daughter Nancy, as well as a wet-behind-the-ears cavalry lieutenant, Louisa finds herself on foot and without a gun, having become the killers' prey...

Louisa drew a deep, calming breath, and thought it through. Since there was no way up the wall, she had to get around it. Walking in either direction, east or west, she eventually had to come to an end of the ridge or an easier way up the wall. That route might lay a hundred yards or a hundred miles away, but she had little choice but to look for it.
Arbitrarily deciding to head east, she started walking.
She’d walked maybe ten feet when she stopped and swung to face the river, which she could see glimpses of through the trees. Above the river and the whooshing of the wind in the branches, she could hear hoof thuds again, and men’s voices.
Not finding her tracks up canyon, they’d returned.
Now they’d easily find her sign where she’d entered then left the river, and they’d be on top of her in five minutes.
Louisa looked around, trying to quell the hammering of her heart against her ribs. There was nowhere to hide. Nowhere that her tracks wouldn’t lead the killers right to her.
She swung to the wall. It looked as sheer as before, but she found a jagged, vertical seam. Not knowing any other way, she leaped up the wall, grabbed holds where her hands and feet found them, and started climbing.
Behind her rose the pounding of galloping horses.
Louisa released one hold, reached for another, moving her hands and her feet slowly but deliberately and as quickly as she could, amazed that each limb seemed to find something—a small cleft, a crack, or a knob of jutting stone—as though of its own accord.
Soon she was twenty feet, then thirty feet up the wall.
Something smacked the rock wall two feet to her left. It was followed by a Winchester’s belch.
Louisa’s ears rang from the screech of the hot lead off the rock way too close.
She paused, trembling, fingers and toes aching where they clung with all their might to their holds. She looked straight down the wall. The three riders sat at the base of it, staring up at her without expression, their eyes dark beneath their hat brims. Even their horses were lifting their heads, looking at Louisa clinging desperately to the ridge wall.
Apache Wade cocked the carbine in his hand with menacing casualness and slowly raised it to his shoulder.
at November 27, 2016 No comments: