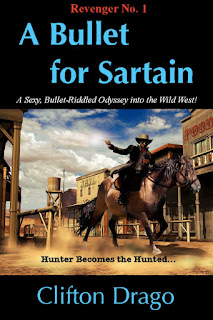 Mean Pete would like to introduce you to a brand-new, adult western series in the style of Longarm, Slocum, and Trailsman.  Only cheaper by half, and better!

FROM A WRITER OF LONGARM AND TRAILSMAN...COMES A SEXY NEW WESTERN ADVENTURE SERIES...

Mike Sartain, the Revenger, grew up in the French Quarter of New Orleans where he was taught how to fight by some of the toughest, meanest SOBs in any port.

He was taught how to love by some of the most beautiful women in the world.

When the War Between the States broke out, the young Cajun lied about his age to join the Confederacy.  At war’s end, he came west and joined the frontier cavalry.  Wounded by Apaches in Arizona, he was nursed back to health by a gnarly old prospector and his beautiful daughter, Jewel.

When the prospector and Jewel were viciously murdered by marauding Yankee bluecoats, Sartain hunted the soldiers down and killed them one by one in his own fierce Cajun style.  Killing the prospector had been bad enough.  Killing Jewel had been far worse, for the young beauty had been carrying Sartain’s unborn child.

That’s how Mike Sartain’s lust for revenge got started.  That’s how he became a wanted man, with a dead-or-alive price on his head.

Now, with no choice but to keep on riding, the Revenger rides for anyone who has a justifiable ax to grind...

REVENGER 1: A BULLET FOR SARTAIN

In this first book in this brand-new, sexy, all-action western series, the Cajun is lured into a trap baited with two names from his New Orleans past.  When his best friend takes a bullet meant for him, the Revenger straps on his LeMat and rides for his own white-hot brand of revenge once more...

HOT NIGHT IN A BORDER TOWN

“I’m up here, pendejo.”
Sartain slid his gaze up from the marshal of Sonora Gate’s deep, olive cleavage, beyond her slender neck and across her rich lips and cool nose to her eyes that smoldered out from her smooth, tanned face that could have been carved by a master craftsman out of the finest oak, depicting a heart-rendingly alluring senorita from the pages of ancient Spanish myth and legend.
A more perfect, intoxicating creature Sartain had rarely seen.
“Claudia, you’re...all over,” Sartain said, wagging his head in awe at the creature before him, feeling a drum beating in his loins.
“As I was saying, I should arrest you.”
“And go and spoil a good time?”
“What good time?”
“The one we could have later”--the Cajun grinned again, showing all his white teeth--“if you played your cards right and promised not to disrespect me in the mornin’.”

Buy it at Amazon: A BULLET FOR SARTAIN