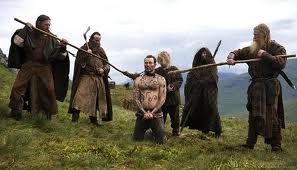 (That fella there?  He's a writer who was caught revising.)

Here is a confession prompted by an email conversation I had recently with a writer pal of mine: I used to write when I didn’t know what the hell I was writing about.  I committed the unpardonable sin of wasting words, which is akin to pouring good beer on the ground.

I used to write even when I didn’t know where the plot of my tale was going, where the character or characters were heading and why they were heading there.  I had the sense that I would eventually write my way out of the trees and again see the forest, and that the plot and my characters’ motivations would again be clear, the incidents interesting to read about, and I’d rekindle my own as well as my reader’s interest in the utter crap I was oozing like pond scum onto the screen.

But who on God's green earth wants to read all that meandering stuff, that crap between the interesting parts?

And what writer wants to revise it later?  If he didn’t revise it later and it somehow made it into print, well, in a metaphorical sense that’s the sort of thing that gets a writer tarred and feathered.  Or, at the very least, loses readers and thus the writer’s livelihood so that he must sell his family into coal mining slavery in Siberia.

Most writers have written when it isn’t going anywhere, and it’s a lousy feeling.  It feels listless and that’s just how it bleeds out on the page--one listless word after another.  Each word looks like a dead worm after a rain.  Of course, no writer in his right mind would send that stuff off to a publisher, so he’s tortured twice by it.  First, by writing it, and, second, by having to read it again in the draft he’s editing, and cut it or fix it in some torturous, mind-numbing way.

And that’s like trying to perform CPR on King Tut.  Yuck!

Stop writing and go have a beer.  Yes, you heard me.  You have hereby been granted permission to knock off for the day and pop a cold one.  Run like a child freed from the draconian torment of our public schools to your own sweet version of my Canyon Grill, belly up to the bar, and have ole Mort pop you a cold one, “And keep ‘em comin’, Morty.  Mean Pete said I could.”

And if you’re a mewling, yellow-livered ne’er do well who needs his little sister to tie his shoes for him each morning, you’ll do just that!

However, if you’re a ragin’ Cajun or a hairy chested Viking who salutes the gods of the writer’s bloody war only when the day’s work is done--when the day’s good work is done, the stuff you won’t have to stitch and sew and hammer to a pulp later because real men don’t revise because they do it right the first time! you’ll simply take a walk and think through the next three incidents in your novel or story or sports column or whatever it is your hammering the keyboard on.

Take a walk or mow the grass or paint the fence and think it through.  Come up with the next three interesting incidents in your yarn.  I’m talking the three most interesting, colorful, rollicking, bell-ringing, plot-driving happenings you can come up with--the best in the book so far, by gum!  A series of dramatic scenes or encounters or conversations that propel your plot forward with the velocity of a rocket launcher and that will have the priests blushing, the women swooning, the dogs barking raucously, the sailors slapping the tables with abandon, and the cowboys shooting their pistols in the air.

Imagine the next three things in your tale that leap right off the page to plop into your reader’s beer and take his breath away.

Then go grinning back to the ole salt mine of your worktable and get ‘er done.

So there you go.  Stop revising.  Revising’s for wussies.  No whimps allowed.  Go ahead, quote me on that!

Now, pardon me but I’m headin’ on down to the Canyon Grill for the good stuff and to ponder what color tie I should wear to the Nobel luncheon. 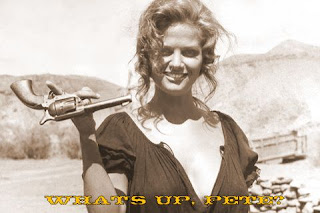 (That gal there?  That's the sorta thing that awaits the writer who does not revise.)