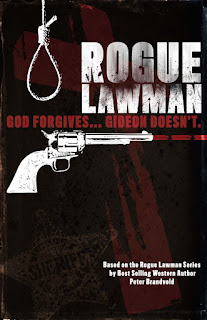 The ROGUE LAWMAN film project is now live at Kickstarter.com.

Go over and see what Peter Lefevre, producer at Propeller Productions, has put together, including who has already signed on to play Gideon Hawk, the Rogue Lawman himself!  A legendary character actor, a man I've admired for most of my film-watching life, has also signed on...

ROGUE LAWMAN KICKSTARTER PROJECT
at May 17, 2013