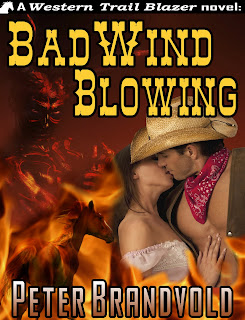 I was always a bit of an odd child. No animals were injured though the neighbors were traumatized and the one lone cop in our town kept an extra sharp eye on that little white house at the edge of Napoleon, North Dakota.

This book should prove my instability--my first weird, or "paranormal," if you like, western. A kick-ass tale of rough and ready Clay Carmody, a gold-seeking drifter, and the beautiful sheriff of Camp Hawkins, Colo. Terr.--Claudine Bridger. (She's hot!) This frisky duo gets in all kind of trouble, including love trouble, as they stalk an Indian demon up Poudre Canyon.
Lots of grisly happenings in this one, friends. Snakes slithering out of a school privy, old women hanging themselves, dead hardcases coming back to life again and raising hell, etc. And my demon looks like a pig crossed with a bear but with a mountain goat's body. He bugles like an elk on Halloween! (Think Sarah Palin swilling PBR's and drawing a .357 bead on Todd.)
I wrote this book several years ago but had it rejected by my usual publisher because of the "weird" element. I've been snarling and licking my wounds, keeping the manuscript close, and biding my time.

FILL A STEIN AND GRAB A BLOODY HAUNCH!

FILL A STEIN AND GRAB A BLOODY HAUNCH!

That, in a heraldic nutshell, is my approach to writing.

Simple as a Zen painting and elemental as a pissed-off bobcat.

In other words, when I pour that first cup of morning mud thick enough to float a lumber drey, wrestle onto the floor amongst my snarling curs, and pick up my Macbook Pro which I prop atop my knees while said curs cozy up against my ribs and growl themselves into rabbit-rending dreams--yes, I write on the floor, close to the beasts and cold, hard earth!--I do not pad meekly but bull headlong into that netherworld of my own fevered conjurings of wild-assed adventure.

I throw my head back and bellow as loudly as I can--albeit to myself, so as not to arouse the carrion-eaters--“FILL A STEIN, MERRY LISTENERS! PULL UP A COLD ROCK BY MY HOT FIRE, GRAB A BLOODY HAUNCH OF ROASTING VENISON, AND PRICK UP YOUR EARS FOR THE STORY I’M ABOUT TO SING!”

Unless you’re trying to be Agatha Christie, that’s really the only way to do it.

Admittedly, as on most subjects, I have narrow views on writing and literature. I think a story, whether it be short or long, should be a little wild and scary, sort of like the tattooed, Harley-riding jake your parents live in dread of your sister marrying. It should blow some cigarette smoke in our faces, flex its ghastly biceps, make us gasp in shock and giggle in delighted horror at the cheerio it just spun in our driveways.

Not that good fiction--I ain’t so looney as to say I write anything close to lit-ra-chah--shouldn’t also be thoughtful and reflect on our place in the cold, lonely universe in which there may or may not be a god and a reason for our being here enduring all the bullshit.

But it should also entertain the bejesus out of us. Cause our hearts to race. Interrupt our sleep with bizarrely vivid dreams. It should cause us to daydream if for just a few minutes each week in our office cubicles of telling the boss to stick it in her ear, we’re joining a carnival.

As a writer of relatively “traditional”--I really hate that word, because I don’t see myself as traditional at all--westerns, I write to entertain. But I got into this racket after beating a circuitous path through several improbable canyons.

They weren’t half bad, either. One was published in a university quarterly and even anthologized later, and though it first appeared nearly twenty-five years ago now, I’ve recently received letters about it.

I say they weren’t half-bad, but I don’t think I could revisit even the best of them now without falling asleep. And that’s how I feel about most of the mainstream literature, and even most of the genre fiction, sorry to say, that is published today. It puts me to sleep. And that’s a bad, bad thing.

Because writing--even literary writing--should entertain or at least send some blood to our organs.

As a wide-eyed young English major fresh off the lonely prairie and wanting to read and write adventurous things, tales that made me feel eager and vibrant, I found myself nodding off over most of the novels I was assigned in college.

There were many that I liked, even some that inspired me. Moby Dick and the old Icelandic sagas, for instance. (The first was a wonderful if sometimes slow-moving and overly detailed story of one man’s war against the universe; the latter yarns were, as Michael Dirda described them in his Barnes and Noble.com review of one of my old favorites, The Long Ships by Frans G. Bengtsson, “spaghetti westerns with swords--only more thrilling.”)

But so many more I slogged through, blubbering. You can take Faulkner and George Eliot, and throw them in the same river.

After reading reams of those colorless and only marginally meaningful stories in the “small” magazines, I was deluded into thinking that that was the kind of stuff I needed to write to be taken seriously. That good writing had to be slowly plotted, overly ponderous, filled with self-conscious devices, and downright boring.

I was among those who sneered at anything that smacked of unheeled entertainment. Even at those I’d grown up reading, those wonderful storytellers who’d first inspired me to spin my own yarns all those years ago on the prairie. Writers like Alexandre Dumas, Rafael Sabatini (Captain Blood!), Ray Bradbury (The Illustrated Man!), Jack Williamson, Leigh Brackett, Edgar Rice Burroughs, Max Brand, C.L. Moore, Robert E. Howard, H. Ryder Haggard, and countless others of the pulp variety.

But wait a damn minute--isn’t that the stuff that inspired us to sing around our cave-mouth campfires all those eons ago in the first place?

Entertainment? The stuff that made us laugh, cry, scream, dribble down our legs? That set the boys wrestling, the damsels dancing, and the dogs howling?

Now, I’m not saying it all has to be pulp. Or that when I sit down on the floor with my savage woolies to write my own brand of western entertainment that I don’t try to include more than just thundering .45’s, bulging corsets, and fisticuffs.

I think a story should entertain first and foremost. But it should also cause us to reflect, however briefly and genuinely, without being maudlin, on what it’s like to be humans in a world that is largely unknown and unknowable to us, and filled with tragedy and suffering.

If we genre writers draw our characters well, make them more than just types, but give them flesh and blood and their own unique way of speaking and living and loving, and give a little voice now and then to our own cares, our own angst, then readers will naturally find the depth that is there in the yarn between the shootouts and mattress dances, the depth that reflects the writer and the larger world that we and our tales grow out of.

H.A. DeRosso does that. (Just read his novel .44 and his novella “The Bounty Hunter,” and tell me he doesn’t. Often, T.V. Olson does it, too. Others include Dean Owen, Merle Constiner, Donald Hamilton, Giles Lutz, and Giles Tippette. My good friend Kit Prate does that as well. See her wild and sexy Hot Night in Purgatory (as by Steve Travis) as well as Jason Kilkenny’s Gun. You’ll never find more harrowing violence or deeper, more compelling western characters.

Jack Vance and C.L. Moore do that in western’s brother genre, science fiction.

What about Louis L’Amour?

Don’t care for the jake. He started out as a fair to middlin’ pulp writer and then, taking himself too seriously, became a pompous blowhard. Oh, he was all right when I was fresh from swaddling clothes and before I discovered better, more compelling western scribes like those I listed above, and Mickey Spillane.

And the biggest sin of all--they’re bloodless!

I like sex and violence in my yarns. Lots of it. Interspersed with the tender moments, mind you. But I like the stuff that makes my eyes pop and my loins happy. I’ll take a hearty dose in every chapter, please!

If I want to be put to sleep, I’ll take a pill.

That’s just who I am.

I’m sorry if I’ve offended you, caused you to shake your heads and stitch your brows in reproof. Or even to slam my books closed with the ear-splitting blam! of a .44 triggered in the tight confines of a whore’s crib.

Evoking a visceral response is what I set out to do. And I suggest that if you’re trying to write, you do the same thing.

Kick off your slippers and go barefoot. Add a little firewater to your mud.

Crowd in amongst the beasts and shout at the tops of your wicked lungs:

“FILL A STEIN AND GRAB A BLOODY HAUNCH!!”