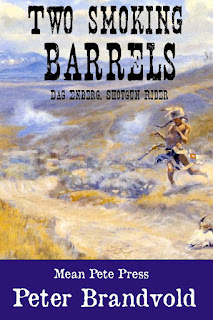 FROM THE KING OF THE SEXY, HARDBOILED WESTERN!

For a while, Dag Enberg managed to hold onto his job as shotgun rider for the Yuma Line. Logan Cates worked it into his deal with Bud Normandy, whom Cates sold the line to. Cates lies dying in his big Victorian house overlooking the little desert town of Mineral Springs.
As is always his way, however, Dag once again becomes his own worst enemy. He gets himself fired when he raises a drunken ruckus in the Diamond in the Rough Saloon and beds the beautiful--and off-limits-- Zenobia Chevere.
“Enberg’s March,” the night comes to be called. Enberg’s explosion of lust and violence will live on in legend.
While much of the town might find Enberg’s stunt amusing, his wife does not. Emily heads out with her mother on the next stage. Though she’s pregnant with Dag’s child, her crazy Norski husband has finally pushed her too far.
When Apaches run down Emily’s stage, Enberg finds himself with maybe one more chance to win back his wife as well as his honor...if the Apaches don’t slow-roast him over a low fire before he can find her...

“Grab the sonofabitch!” shouted Marshal Clemens, climbing to his feet and retrieving his hat, a wing of mussed, gray-blond hair hanging over his right eye.
Two deputies jumped on Enberg. They weren’t nearly as big as Dag, and he shrugged one off easily, punched the other one, and then stepped over Normandy and stumbled off down the hall toward the stairs. He was grinning now, feeling exhilarated from both his sex with Zee and the fight.
When he was filled with whiskey, he loved nothing more than sex and a fight, not necessarily in that order.
Men stormed him from behind, and two more went flying. One punched Enberg in the back of the head and then in his ear, grunting as he hammered away at the big Norwegian. Enberg hardly felt the blows. He returned both punches to the man’s mouth, smashing the man’s lips and sending him stumbling back into the others, his mouth a bloody mess.
Enberg swung around, laughing, and continued on to the stairs. As he started down the steps, he yelled to Underhill who was still working behind the bar, “Another bottle, Wade. That first one went down like communion wine!”

GIDEON HAWK, THE ROGUE LAWMAN, IS BACK! 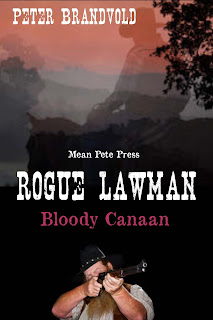 GIDEON HAWK, THE ROGUE LAWMAN IS BACK AFTER A TWO-YEAR HIATUS... Gideon Hawk is back riding the rough, lawless trails of the western frontier, piling up justices for his dead wife and son.
Hawk is holed up in an old prospector’s cabin high in the Idaho mountains when he learns that an innocent girl has been kidnapped by the notorious outlaw businessman, Quentin Burnett. Burnett erroneously believes he owns this entire corner of Idaho...and all the people in it, including the girls. Burnett has a history of kidnapping young women and marrying them. He gets away with it because he’s rich and he knows the most powerful men on the frontier. When Burnett’s girls get too old for him, or he just plain tires of them, he sends them down to the second floor of his New Canaan whorehouse and puts them to work on their backs. That dark fate is not going to happen to Jennie Broyles. Not if Hawk can help it. With the assistance of the beautiful Saradee Jones, Hawk’s lover as well as his nemesis, Hawk goes to work showing Quentin Burnett what happens when bad men cross the Rogue Lawman’s trail. The only problem is Burnett has a passel of notorious gunslingers riding for him, and it might just be that this time Hawk and Saradee have taken on more than they can kill...

“You know what, Saradee?”
“What’s that, Marshal Hawk?”
“I’m gonna miss you. Not as much as I miss my wife or my boy, but, may the gods forgive me, I am gonna miss you.”
“There you are—see?” Saradee said with delight, kissing him once more as the posse’s lead sung around them. “You’re under my devil’s spell!”
“I reckon.” Hawk laughed. He could laugh about it now, because he had so little time to live. Maybe ten more bullets was all he had left in his guns.
Then the torture of this life—all the bitter memories and strange hauntings and his hammering lust for this beautiful devil lying here beside him in this virtual stone coffin—would end.
TAKE A LOOK AT AMAZON