Fill a Stein and Grab a Bloody Haunch: The Ravings of a Bloodied Veteran of the Word Wars Now Available! 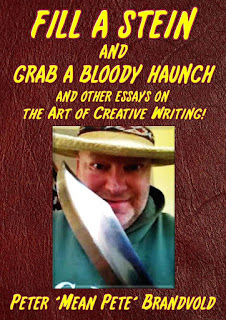 Peter Brandvold has been earning his living as a writer for the past twenty years. He’s written everything from articles and essays and short stories to over a hundred novels published by traditional New York publishers and, most recently, by his own Mean Pete Press ebook-original imprint. He’s written series books, including Longarm and Trailsman, under many pseudonyms, including Frank Leslie, and he also wrote the Bat Lash: Guns and Roses mini-series for DC Comics with John Severin and Sergio Aragones.

Here he is, standing up during a lull in battle, dusting himself off and spewing forth what he’s learned in the trenches, his insights and witticisms on these changing publishing times.

Here you will find the nuts and bolts about how to write with a good bit of chest-thumping thrown into the mix—a heraldic horn blown in a call to arms...or pens...or keyboards.

Here you will also find the simple honesty of a life lived hard and true to the writer’s calling—personal essays recounting a story-telling mother, friendships with dogs, and the ravages of divorce. You will also find two short-stories, one a spine-tingling horror tale set in the piney woods of the Deep South, the other a literary tale of life and death fought out by an old man battling a noxious weed commonly found on the northern prairie.

This is a rousing, entertaining volume for those writers and readers who want and need some inspiration as well as insight into the life not of a rich and widely heralded “author” like Stephen King or J.K. Rowling, but of a blue-collar writer often scrambling to make ends meet, of a writing life fought daily in the muddy trenches, bodies piling up all around, artillery exploding, bullets flying way too close.

CHECK IT OUT ON AMAZON!