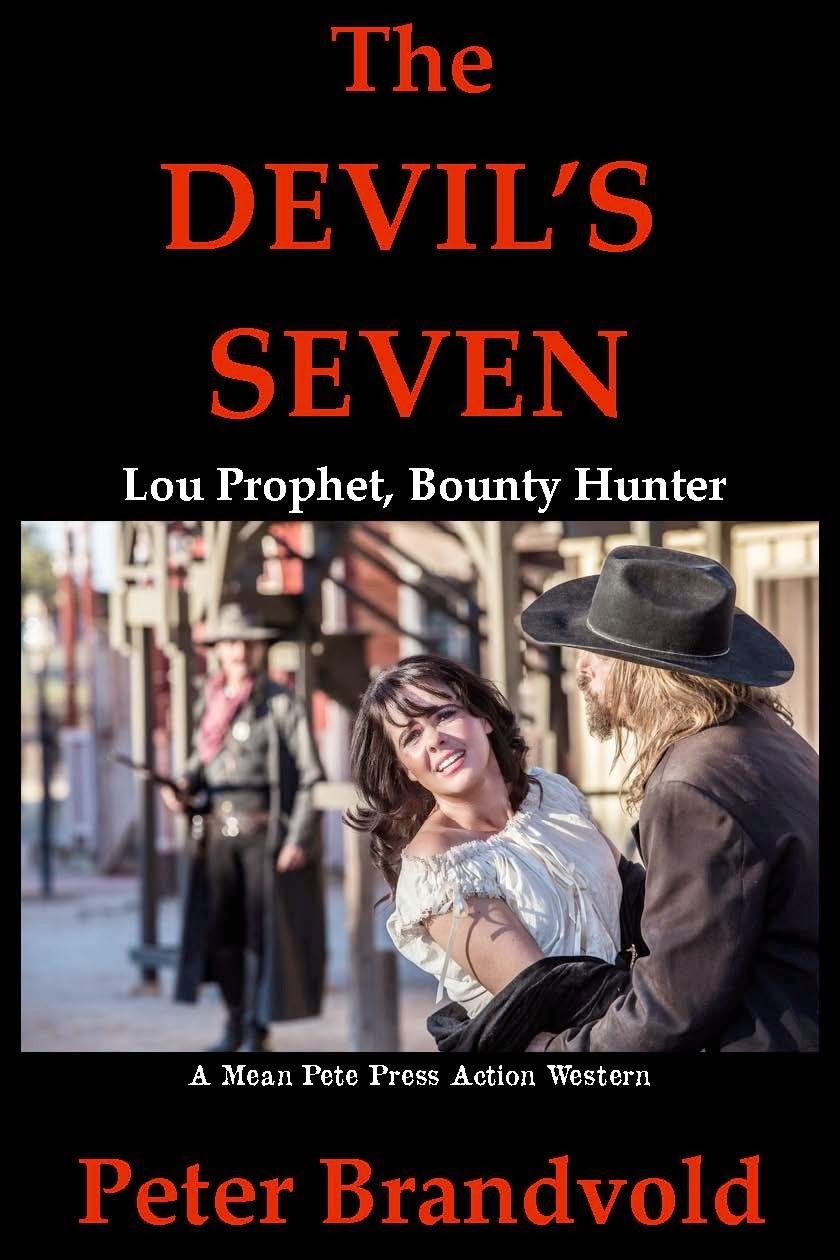 As I mentioned, I'm keeping a working journal as I compose this latest western actioner featuring Lou Prophet and Louisa Bonaventure. I thought I'd post the first couple of entries here and then some more later on.

April 22—Chapter 1, Opening Two Paragraphs
There, I got her started. I wasn’t going to start today but I just finished and turned in my last book, and I was sitting here waiting for happy hour and had a hankering to write the first sentence of the new Prophet book. So I did. I wrote three, in fact. Hope that first one isn’t too long, but that’s how the voice in my head spoke to me. It does what I like to do in the opening—puts the main character on stage right off the bat, and gives some details about the setting. And I know Prophet readers enjoy reading about Mean and Ugly, so I brought in the cantankerous horse, as well.
Time for a drink...or two. Too warm and windy to take Sydney, my old Australian shepherd out for a walk. Might sit on the patio and read the western I’m reading, A Strange and Bitter Fruit, which is a strange and bitter fruit, indeed. Not published as a western, though, which is ‘strange.’ Is the author ashamed? The book is oddly compelling though poorly written and I think I’ll go into more of what I like and don’t like about that book as I’m writing my own. Not to offend the author. He definitely has skill and, hey, I’m sticking with it—roughly a third of the way through-- so he’s doing something right.
Might put up the hummingbird feeder and fire up the grill. This is the first day that really felt like summer, and my eyes are  burning because the rabbit brush is blooming right off the patio.
I love it when I finish a day’s work and am looking forward to getting back to it tomorrow. Sweet.

April 23—Chapter 1
Well, I’ll be hanged if I’m not getting the biggest kick out of writing about the old Confederate, Lou Prophet again! Slipped right back into the voice that just came to me when I started writing the first book nearly fifteen years ago now. Funny how a different narrator slips into my head for each of the series I write. A different person with a different personality, a different outlook.
The Stillman books are a tad more serious than is the narrator for the Prophet books, but that narrator must be a close cousin to the narrator of Prophet, because there’s quite a bit of humor there, too.  The Rogue Lawman narrator is a grim bastard. Almost depressed, clinically so! But I still try for humor in that series, because I don’t think any yarn is complete and well-rounded without humor. I tend toward gallows humor in the Rogue Lawman books, however. Most of the novels I read, or try to read, these days are flat, almost without any personality at all, as though their writers are nothing more than keyboards.
The Spurr Morgan narrator is more Twain-ish, with a little of the bittersweetness of Stephen Crane and Hamlin Garland in him, since Spurr is old and nearing the end of his stormy life. Cuno Massey is lighter, almost a juvenile voice, as is the Colter Farrow voice. Prophet is light and whimsical, even in the more serious Prophet books, but the voice I’m channeling here seems to be close to the voice that dictated the first Prophet book to me—The Devil and Lou Prophet. The voice here is the voice of an old, corn-sipping Southern uncle narrating his experiences in the Wild West after the War of Northern Aggression.
It’s good to have him back. He’s a man with a bit of poetry in his soul, and some bawdy Southern charm, and he likes horses, too, which is good, because Mean and Ugly really needs to come to life. He’s a character in the books, too, after all.
There’s no action in this scene yet, and I usually don’t cotton to that, especially in the beginning of a book. I like to start wild, with the hero or heroine already dodging bullets. But there is a sense of menace here, and anticipation and anxiety, because Prophet is meeting some mysterious person who slipped a note under his hotel room door, telling him to visit an abandoned cavalry outpost if he wants learn about the fate of his comely partner, Louisa Bonaventure. The ghosts of two cavalry soldiers, long since murdered by Arapahos, suddenly showed up of nowhere, and they’re dancing to a scratchy fiddle, so there’s a little of the occult here, too. A ghost story!
Prophet is a Southerner, after all, and they’re a might on the hoo-dooy, superstitious side, not unlike old Huck Finn...
Onward!

Done with chapter one. I hope I’ve put the reader in the time and the place and given him a menacing chill. Prophet has one for sure now as he walks down into the ruined outpost.
If you read this part of the book, you’ll notice I’ve not included much background information on Prophet. I’ve alluded to his pact with the devil that was explained in previous books, and it all needs to be clear here, too—how the war devastated him to the point that he made a deal with Ol’ Scratch: if the Devil lets him enjoy the time he has left on earth, he’ll shovel all the coal the old demon wants down in hell. But that’ll come later. I hate it when writers fill up their first chapters with big chunks of bland background information. That stuff will come into the story, but I’m hoping I’ll find more creative, colorful ways to do it than just spewing it out via bald exposition. There are ways to do that and to still keep the action moving, the reader’s senses engaged.

April 25—Chapter 2
I wrote all of chapter two today. It’s damn near five o’clock and I clocked over 2k words—just in time for happy hour! Wrote the last 500 after an afternoon walk with Syd—a walk I hardly remember even taking because I was Lou Prophet, stealing down that rocky bluff, my trusty Winchester ’73 in hand, on the way to investigate the remote, long-abandoned cavalry outpost where several years ago Prophet had spent a jittery night, watching two ghosts of cavalry soldiers dancing hand in hand to the strains of a scratchy fiddle. I have no idea where this crap comes from. I didn’t think that up before I sat down. It just seeped out of my fingers as they danced across the keyboard. But I think it works as it adds to the menace of the situation down there in that ghostly outpost.
I have Louisa on the scene now, too, in what I hope was a bit of a surprise for the reader and in a way that also added some tension. It’s all action and tension here—crisp images of the fort and the old officer’s quarters and surrounding buttes and the liver-colored cat that showed up unexpectedly--with very little background, and that’s how I want this book to be. All action all the time. What you learn about Prophet and Louisa you get through action—or at least through active thoughts.
Now, let’s see who brought Prophet and the Vengeance Queen to this remote outpost, and what they’re up to.
at April 26, 2014