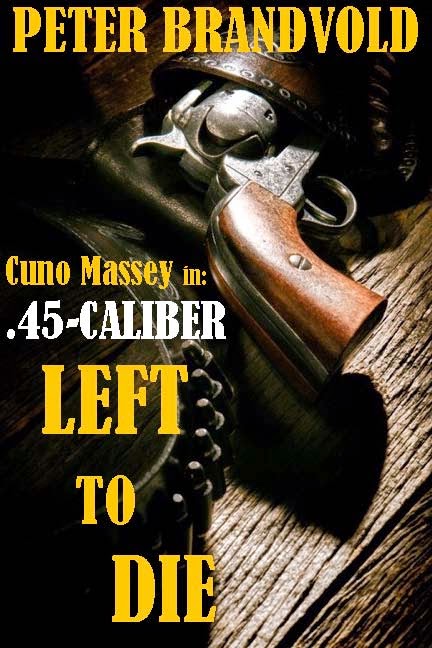 [This ebook original will be out by the first of next month...only from Mean Pete Press!]

Jeston Taffly waved the pistol at the chair on the far side of the table. “Sit down.”
As Cuno stepped back toward the chair, Taffly grabbed his rifle off the table and leaned it against the wall by the door. Cuno sat down. Taffly set the bottle on the table and, keeping the pistol aimed at Cuno’s chest, he sat tensely down in the near chair.
His eyes were red-rimmed and rheumy. From the stench and the way he slurred his words, he’d been drinking all day.
Working up the courage to kill in cold blood.
“I figured I’d find you both here,” the man said when he’d taken another deep pull from the bottle. “Rode back to the ranch, she wasn’t there. Rode over here.”
“And then what were you going to do if you found us together? Shoot us?”
“Why not?”
“It wouldn’t change anything.”
Taffly took another pull from the bottle, wiped his mouth with the grimy sleeve of his jacket. “Maybe not. But it’d make me feel better.”
“She doesn’t love you. Seems to me you never gave her a chance to. You just moved into the house from the hired hand’s shack when her husband died, and started giving orders.”
“I took her husband’s place in that house, that’s true. If it wasn’t me, it would have have been someone else.” Taffly glared at Cuno from over the table, his pupils dilating visibly, ears turning red with mindless rage. “Now, what--you think you’re gonna move in and take over?”
Cuno laughed. Not so much because he found anything funny in Taffly’s words. He laughed at the man’s bitter nonsense.
“Don’t worry,” Cuno said, sitting back in his chair. “I don’t think she’s any happier with me than she is with you right now. Whatever happened between us is over.”
“Still leaves me out in the cold.”
“We’re all out in the cold. Why don’t you get up and ride on out of here, Taffly? So far, you don’t have any blood on your hands. Life is better that way, believe me. You can start again somewhere else. Fresh.”
“Nah.” Taffly shook his head and raised the cocked Schofield a little higher above the table. “I’m gonna kill you.”
“All right. Have it your way.”
Cuno had his hands on his knees. Now he slammed them up to the edge of the table, and, rising from his chair, lifted the table in front of him like a shield, pushing it back hard into Taffly.
The man screamed. The Schofield barked.
The slug plowed into a ceiling beam as Cuno continued to drive the table into Taffly. The man and his chair fell backward, hitting the floor with a thud.
Cuno saw the Schofield on the floor to his left. He kicked it away then tossed the overturned table aside.
Taffly lay writhing on the floor, raging, fresh blood oozing through the reopened cuts in his lips. Cuno straddled the man, grabbed him by his coat lapel, and hammered his face three times with resolute right jabs.
Taffly fell back against the floor, stunned.
“Have you had enough?” Cuno asked him.
Taffly shook the cobwebs from his head, and glared up at Cuno. “I’m gonna kill you if it’s the last thing I do!”
Cuno punched him again...again...and again.
Again, Taffly lay against the floor, blinking and groaning.
“How ‘bout now?”
Taffly threw his right hand out as though searching for the Schofield.
Cuno hit him again—this time with a left uppercut that drove the man’s head back hard against the floor. He was about to hit him again with the same fist, when Taffly, fear now sharp in his eyes, raised his hands in front of his face.
“Enough!” He was bleeding profusely from several lacerations, and his left eye was swelling. “Enough,” he wailed, shrinking back against the floor.
Cuno pulled the man to his feet and led him outside. Taffly was dragging the toes of his boots, arms hanging slack at his sides. He was only half conscious.
“Where’s your horse?”
“Wha—huh...?”
“Your horse?” Cuno said, louder. “Where is it?”
“B-back. Out back.”
“Let’s go find it.”
He led Taffly around the line shack and into the woods. The man was staggering, drunk and beaten half-senseless. Finally, Cuno saw the man’s horse. He helped Taffly into the saddle. The man groaned. Cuno gave him the bridle reins and then his hat, which he’d snatched off the line shack’s floor.
“There you go—put that on. I’m doing you a favor, Taffly. One that you’ll never have to repay. But don’t thank me. Just get the hell away from here. A dynamite keg is about to explode around Ocotillo. Believe me, you don’t want to be anywhere near when it does.”
Taffly looked around, his left eye swollen nearly shut. “Where...where in the hell am I supposed to go?”
“Anywhere but here.” Cuno slapped the rump of the man’s horse, watched it gallop east through the woods, heading toward the trail. “If I ever see you again—I mean ever—I’m going to kill you. No questions asked!”
The horse galloped through the trees, swerving around pockets of brush.
Gradually, the hoof thuds fell silent.
Taffly was gone.
Cuno went back into the line shack and loaded the Winchester for a ride to town.
at March 20, 2015