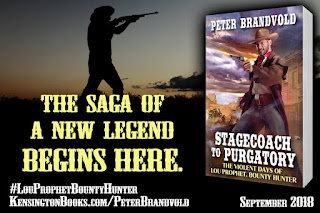 From The Life and Times of Lou Prophet, Bounty Hunter by HEYWOOD WILDEN SCOTT

I’d been a tough-nosed newsman for nearly sixty years, yet it was with more trepidation than I like to admit that I knocked on the big, old rebel’s door.

I’d heard the stories about him. Hell, I’d printed many of those yarns in the various newspapers I’d written and edited in that grand old time of the Old West gunfighters, larger-than-life lawmen, and the much-maligned, death-dealing bounty hunters, of which he’d been one.

Yes, I’d heard the tales. I’d printed the tales. With feigned reluctance (I was a journalist, after all— not a reader or writer of dime novels!) but with unabashed delight, if the truth be known. With ad- miration and even envy. Imagine such a man living such a life at such a time, hoorawing badmen of every stripe, risking life and limb with every adventure while the rest of us suffered little more than festering galls to our posteriors while scribbling ink by the barrel onto endless rolls of foolscap in dingy, smoky, rat-infested offices off backstreet alleys, the big presses making the whole building rock.

I’d heard from those who had crossed his trail that he was a formidable, mercurial cuss, by turns kindhearted and generous and foulmouthed and dangerous, and he’d grown more and more formidable, unpredictable, and recalcitrant with age. The years had not been kind to him. But, then, what would you expect of a man who had lived such a life and who, it was said, had sold his soul to the devil, ex- changing an eternity of coal-shoveling in hell’s bowels for a few good years after the War Between the States “on this side of the sod, stomping with his tail up,” as he was known to call what he did between his bounty hunting adventures?

In fact, I once heard that he’d hunted only men with prices on their heads in order to pay for his notorious appetite for whiskey, women, and poker.

He’d seen so much killing during the war, out of which he’d emerged something of a hero of the Con- federacy, that he really wanted only to dance and make love and swill the Taos Lightning to his heart’s delight. But he was not an independently wealthy man, so it was only with great reluctance, I’m told, that after such bouts of manly indiscretions he took up his Colt .45, his Winchester ’73 rifle, his double- bore, sawed-off, twelve-gauge Richards coach gun, and his razor-edged bowie knife, and stepped into the saddle of his beloved but appropriately named horse, Mean and Ugly, and fogged the sage in pur- suit of death-dealing curly wolves prowling the long coulees of the wild and woolly western frontier.

He usually had a fresh wanted circular or two stuffed into his saddlebag pouches, carelessly ripped from post office or Wells Fargo bulletin boards.

Now, as I rolled my chair up to his room, I’d recently seen for myself that he was every bit the colorful albeit formidable old codger I’d heard he was. It had been only within a week or so of this recounting that the old warrior had shown up at the same Odd Fellows House of Christian Charity in Pasadena, California, that I, too, after several grave illnesses had broken me both financially and spiritually, had found myself shut away in, whiling away the long, droll hours until my own annihilation.

He’d been working as a consultant in the silent western flickers, I’d heard, until a grievous accident involving a Chrysler Model B-70, a couple of pretty starlets, and several jugs of corn liquor caromed off a perilous mountain road in the hills above Malibu. Now he prowled the halls on crutches—a big, one- legged man with a face like the siding of a ruined barn, at times grunting and bellowing blue curses (especially when one of the attendants confiscated his proscribed cigarettes and whiskey) or howling songs of the old Confederacy out on the narrow balcony off his second-story room, his raspy voice ratcheting up out of his tar-shrunken lungs like the engines of the horseless carriages sputtering past on Pacific Avenue.

As I was saying, I knocked on his door.

I shrank back in my chair when the door was flung open and the big bear of the one-legged man, broad as a coal dray and balancing precariously on one crutch, peered out from the roiling smoke fog inun- dating his tiny, sparsely furnished room.

At least, that’s how I’m translating it. It actually sounded more like the indignant grunt of a peevish grizzly bear prodded from a long winter’s slumber.

Out of that ruin of a face, two pale blue eyes burned like the last stars at the end of the night. At once keen and bold, flickering and desperate.

Wedged between my left thigh and the arm of my wheelchair was a bottle of rye whiskey. On my right leg were a fresh notepad, a pen, and a bottle of ink. I hoisted the bottle high, grinned up at the old roarer scowling down at me, a loosely rolled cigarette drooping from a corner of his broad mouth, and said, “Tell me a story, Lou!”