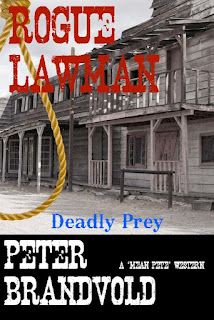 Gideon Hawk is back dropping the hammer on all manner of raggedy-heeled reprobate...even after four territorial governors have signed Hawk's death warrant and sent another lawman, one who was once like a brother to Hawk, out to seal the deal...

This second installment in the ROGUE LAWMAN series--hardboiled western adventure--will be up later today at Amazon.  Should be up tomorrow at Barnes & Noble!

First time in ebook print since it first appeared nearly ten years ago.

Mean Pete (whose forearm is spasming from all the 12-ounce curls he did over the Labor Day weekend...)