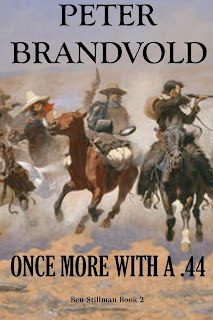 The presses are running over-time in the dingy offices here at Mean Pete Press!

This is the second book in the Ben Stillman series, originally published in 2000.  I just finished this cover last night, using another great Old West painting by Frederic Remington, and should have the book formatted and ready to go by the end of the week.

There are around ten books in the Stillman series, all out of traditional print, and I'd like to have them all up on Amazon and Barnes and Noble by the end of the summer...Lord willin' and the creek don't rise.  I've been having fun with this new project, after having been given a primer or two on it by Livia Reasoner, who also designed the previous two covers.  It helps that the books are selling very well for both Kindle and Nook.  I'm selling them cheap, mostly for the thrill of seeing old Ben out there again, running bad men--and a few bad women--to ground.  The extra beer money ain't bad, neither.

Mean Pete might even get some perfume for his four-legged girl friend, Miss Stella.  Lord knows she could use it!