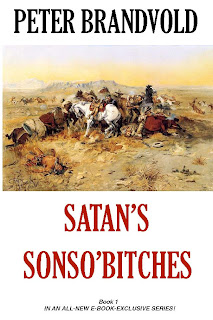 I've been wanting to pen an e-book exclusive series for a while now, just to see how it went.  And I've been wanting to write this series for a while now, too, but I knew no traditional publishers would go for it.  The log line reads, "An all-new action western series so violent, nasty, sexy, and politically incorrect that no traditional publisher would touch it!  In fact, its author is hiding from fallout somewhere out West!"

CNN can't even find him, and they've sent their best-lookin' reporters.

Anyway, I'm working on this slowly, at the end of each day--yeah, when I'm drinking beer.  So we'll see what happens.  But I'll tell you, by the way my ole ticker's pitter-pattering and I'm grinning and chuckling and snarling as I write it, it's gonna be good.  Damn good.  Hell, while I'm hammering away, my dogs even lift their heads and howl.

The yarn's about the biggest, meanest, brawlingest sonofabtich cavalry sergeant you've ever read about or watched on the big screen--Charlie "Satan" Sutton.  He's stationed in Dakota/Montana Territories.  All the officers hate him so bad they try to kill him but when they can't, they assign him and his small group of worthless but deadly sonso'bitches to all the worst assignments in Indian Country.

I hope to have it out later this summer.  I'll publish bits and pieces as I write it so, if you think you can hold your water and not whiz down your leg while reading it, check back for a tidbit now and then.

Till then, my dogs is howlin' here in Outlaw Canyon.