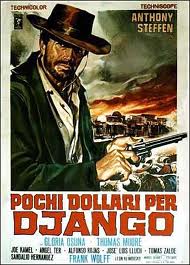 Every time I took a break from my scribbling yesterday and wandered out of the bear den and switched on the TV to see what was happening in the world, all I learned, over and over again, was that another rich, spoiled celebrity killed herself with pills and booze.  So over a long lunch I punched in DJANGO, and the warm and fuzzy feeling that comes to  the well-entertained washed over me.

This isn't my favorite of Sergio Corbucci's movies, but it's a close second and only because Numero Uno is so damn good.  That would be, of course, THE GREAT SILENCE.

This opens with Franco Nero riding into the muddiest town in the West or elsewhere (Corbucci loves mud!) pulling a coffin, and 90 minutes later, after a classic shootout in a Gothic-style boneyard, he's piled the bodies up like cordwood at a sweat lodge festival.

I hear Quentin Tarantino is remaking this, and it should be good, as all his movies are.  But his films are always extremely self-conscious and a little too theatrical--like Tim Burton's--so you're always made to be aware that you're watching a movie.  Whereas this one will suck you right into the mud and damn near drown you in it.

There's a Corbucci fest soon in LA, and Nero's going to be there.  I wish I could be there to see DJANGO on the big screen.  Unfortunately, I'll be festooned deep inside the murky bear den hidden away here in Outlaw Canyon, two steps ahead of the star-packers, snorting and snarling and grunting like Quasimodo in his bell tower, as I peck away at my keyboard.