What Our Prose and Cavalry Charges Should Have in Common 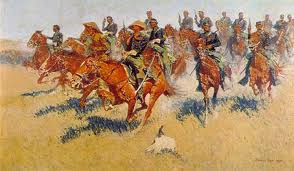 I thought I'd repost this essay I wrote for the Pistols & Petticoats blog.  It was published on Saturday there.  It's mostly for those interested in writing technique and it also gives some insight into how I myself work, for whatever that's worth.

If you missed it, here it is:

WHAT OUR PROSE AND CAVALRY CHARGES SHOULD HAVE
IN COMMON

By Mean Pete, His Own Mean An' Nasty Self

One of the most important things in writing words that sell, and one of the hardest things for most writers to understand until they’ve been hammering away at the craft for years, is how to make those words move.

I mean MOVE like a cavalry charge at the end of a John Ford oater.

Like a bullet fired through the maw of Colt Lightning .44.

Like an Apache arrow slung from a gut-an’-ash bow to plunge into a cavalry soldier’s blue-clad chest with a hard-snapping crunch!, sending blood geysering out the poor lad’s back to paint the rock wall of the escarpment behind him.

All right, enough pulpy examples.  You get the idea.

Let me amend that first paragraph.  Some writers, no matter how long they’ve been writing, never understand how to make their prose gallop.  To make it sell.

Almost always as I wander the bays at my favorite bookstores or peruse the “Sneak Peek” pages on Amazon, looking for a yarn that’s sure to grab me by the throat and not let go till I’ve read the last page--oh, god, how rare is that!--I find prose that slumps on the page like roadkill, like a wet sheet blown off a clothesline.

Twisted and slack and pale as death...

There are several causes for this amateur’s misstep, but let’s skip the causes and go to a few tricks for solving the problem--methods I’ve learned throughout my life and from writing around seventy western novels and continuing to sell and acquire new contracts and new readers.

First, make your prose look pretty on the page.  This sounds sophomoric, and it is.  Something as seemingly insignificant as a how those little black marks are clumped on the page makes a big difference to a reader’s eye whether they’re aware of it or not.  Those marks make a rhythm in the eye just as the sounds they create in your head form a rhythm in your ear.

Frankly, big, heavy clumps of text are just plain ugly.  Sort of like having a big, brick wall you have to climb at the end of your morning run.

As a rule of thumb, I try to make my paragraphs between one and seven sentences long.  That keeps the final printed page from looking too black.  And I vary the lengths so that I seldom get two portly paragraphs together.  Same for one or two-sentence paragraphs, though this is less important than staggering the thick ones.

Look at this essay for instance.  This is how the pages of your pubbed novel should appear when printed.

Another of the myriad ways you can make your prose sing and dance is to make it specific and colorful.  It should be as vivid in the reader’s mind as a scene from their favorite movie.

This is a tough one.  This is the trick that separates the weanling pups from the alpha wolves.  It’s a very hard one to teach, and it really can’t be taught to someone who isn’t armed with a vivid imagination.

Think DETAIL.  And not just any ole detail, but the detail that propels that old saloon in your western novel off the page and seers it into the reader’s retina.  Okay, it’s low-slung and it’s made of adobe brick and there are two hitchracks out front.  That’s still every other saloon I’ve ever seen in books and T.V., even with a drunk cowboy passed out on the porch.

Let’s add a black-and-white collie dog with a burr-matted tail lapping up the spilled beer on the worn pine puncheons beside the cowboy.  The saloon’s missing one of its batwings and the remaining one, wearing a chipped and faded coat of red paint, has two bullet holes in it.

A clay water pot, an ojo, hangs from the porch rafters, left of the batwings, jostling under the weight of the magpie perched on its rim, drinking.

You see?  With details--with nouns and verbs as well as adjectives--we’ve pumped that old saloon back to life.  The scene’s vivid, the prose moves.

Yet another way to make your sentences wriggle around like snakes in your readers’ hands is to write in a conversational tone.  The best way to do this is to read it out loud to yourself.  If it reads clear and easy, if it flows like a good ale over the tongue, you’ve got it.

If it’s stilted and halting, and you have too many four-dollar words and you’re not using contractions, get back to work.

This is much harder than you’d think.  It takes time and practice and patience and, most of all, confidence in your ability to do it.  Eventually, after enough words have flowed over the dam of your mind, they’ll wear the dam away and you’ll be writing so fast and furiously--having so damn much fun!--that you’ll be blowing out one keyboard after another!

Oblige me the mixed metaphor...

Here’s my last tip.  And it’s the most important one.  When you sit down to write, you should be breathing fire.  Your fingers and toes should be tingling and you should be chuckling to yourself like a moron.

If you’re dragging around the house, avoiding your work room and lamenting that today you’ve got to get Carmody and Crystal in the bunkhouse together alone in spite of the horrible things they said to each other the night before, and they have to interact in a way that tells the reader they’re hot for each other though they themselves don’t realize it yet--forget it.

If you write with that attitude, whose going to enjoy reading it?

Take that seemingly static scene by the horns and imagine doing something so unexpected and creative with it that it puts lead in your pencil and makes your ears burn with anticipation.  Maybe you could have the two characters yack for a while and then, out of the blue, something inexplicable overcomes Crystal and, to her surprise as much as to Carmody’s, she throws herself into his arms!

And before the reader has time to get bored with the dull conversation, Crystal and Carmody are making love while a rainstorm hammers the ole bunkhouse roof.

Or if that’s too much of a cliché...I don’t know...send Crystal into a rage.  She picks up a skinning knife and tries to stab Carmody.  Or maybe she does stab Carmody!

The idea is to mix your ideas up, paw them around like a cat with a mouse until you come up with something that has you breathing fire and making your prose chew up the sod like a thousand galloping horses at the end of a John Ford oater. 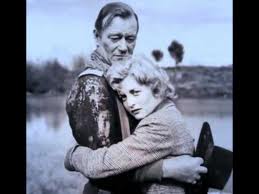