Uncle Hank and the First Westerns I Ever Read 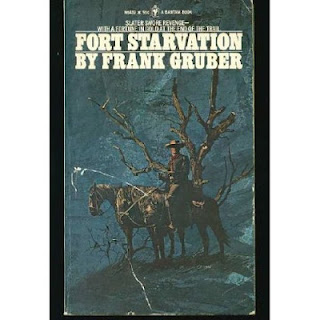 That's the cover of the first western I ever read.  I can't remember the year exactly, but I do remember it was a summer back in the early 70's.

I was spending part of that summer with my grandmother in Rugby, North Dakota, and my great-uncle Hank Wiltse was also spending some time there from his home out in Washington.  I remember he was recovering from a heart attack though he hadn't changed his habits much.  Hank rolled his own cigarettes and drank Miller beer out on the front steps of my grandmother's trailer because Grandma wouldn't let him smoke and drink in the house.

Anyway, it was hot and there wasn't a whole lot to do in Rugby except watch the trains go by.  So one day Uncle Hank gave me two bucks to walk down to Rexall Drug and pick us each up a western to read.  I remember I twisted and turned the squawky spinner rack until I picked out UNDER THE SWEETWATER RIM by Louis L'Amour and FORT STARVATION by Frank Gruber.  I chose those books purely because I liked the cover image on each.  I read STARVATION first while Uncle Hank read SWEETWATER RIM, and then we switched.

I can still see Hank sitting out there on the step in his T-shirt and gunmetal gray crewcut and black horn rimmed glasses, reading and smoking and tipping back his clear bottle of Miller or lounging on my grandmother's flowered couch inside.

I read outside in the shade or inside on the floor near Hank and my grandmother's window AC unit.  Every time I open up either one of those books now and start reading about Slater or Ten Brian, I get a whiff of Hank's Prince Albert tobacco and hear the Burlington Northern rolling by, and feel the reverberation of the massive wheels through my grandmother's trailer floor.  I can hear the creak-creak-creak of my grandmother's orange rocking chair while she rocked and brooded, one leg curled beneath her, her chin resting on the heel of her hand.  I can feel the heat and humidity and smell the winter wheat ripening in the massive blond field rolling away beyond the railroad tracks.

I have Uncle Hank to thank for igniting my love for reading westerns and for trying my hand at writing my own much later.  Before that, I loved watching westerns on the big screen and television, of course, but before that summer I'd never known the special magic of reading one.

I've read a ton since.  I've written damn near 60 under my own name and my pen name, Frank Leslie.  I have no idea why, but I've never dedicated one to Hank.  I wish I could thank Hank personally for firing my life's calling, but he's been dead a long time.  I did name a dog after him, though--albeit a mutt that didn't live very long.  My grandmother thought that was pretty funny but she also knew that as much as I loved dogs, I was bestowing upon Uncle Hank a truly great honor.

Maybe that's why I haven't bothered dedicating a book to him. 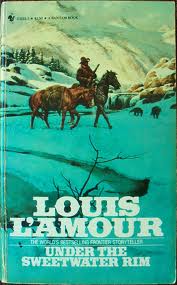