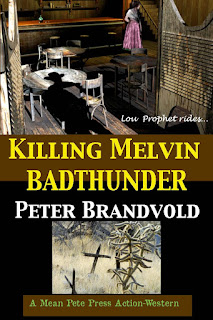 The bounty hunter Lou Prophet wakes up in bed with a soiled dove to find a penciled note deposited in the dove’s cleavage.

“We have the girl.  If you want her back in one piece, ride to Santo Domingo Station.”

Prophet rides out to the abandoned stage station to learn that his beautiful partner, Louisa Bonaventure--“The Vengeance Queen” herself--has been kidnapped and locked away in a snake-infested mine shaft.  To get her out alive, Prophet must do a job for the kidnappers:

Bring them the head of Melvin Badthunder!

Can Prophet hunt down the savage border bandit in time to save his comely partner’s life?

On the trail of Melvin Badthunder, Prophet rides to the little desert town of Muleville to find not only Badthunder but that, as always in a Mean Pete yarn, nothing is quite as it’s supposed to be...

“Lou?”
He had to turn one ear to the heavy door to hear Louisa behind it.  “Yeah?”
“Whatever those sonso’bitches want, don’t give it to ‘em.  I’m just fine in here.  All this peace and quiet is right welcoming after having spent the last two months looking at your ugly face and listening to your endless jawboning!”
A hard knot welled in Prophet’s throat.  Emotion rolled through him like a heavy ocean wave.  Insulting though she was, her voice was music to his ears.
Louisa.
Prophet gritted his teeth and looked at the old man, who was gazing at Prophet and chuckling.  The three younger men were chuckling, as well.
And the next thing Prophet knew, he’d slammed his right fist against the old man’s right cheek.
The old man screamed and hit the dirt like a two-ton bell dropped from a church tower...

A collection of Mean Pete's first six shorts are up now at Amazon, as well, and will be up shortly at Barnes & Noble. 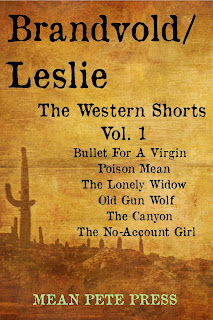