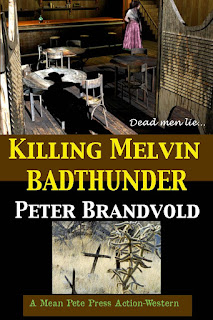 "I WANT YOU TO KILL A MAN, MR. PROPHET.”
The old man seemed to wait for a reaction.
Prophet just narrowed an eye against the razor-edged bayonets that the sun was slinging at him, and tipped his head to one side, trying to find a comfortable position.
The old man slid down off his timber.  He was holding a small, flat, hide-wrapped flask in his free hand.  “The only way to get Miss Bonaventure out of that mine shaft is with a key to the padlock.  I’ve hidden the key up in these rocky hills.  Only I know where it is, and I’m very good at keeping secrets.  Even if you managed to gun down me and my boys, you’d never find it before your pretty partner expired.”
Dabbing the handkerchief to the bloody cut Prophet had punched in his cheek, the old man grimaced with feigned regret.  “I’m guessing there’s not a whole lot of air in that shaft.  Even if there were, I think it only fair to tell you that we left her with no food or water.  Unless she can see well enough in the dark to kill one of the many rattlesnakes I’ve heard slithering around in there.”
Prophet’s guts writhed like diamondbacks in his belly.
The old man held the flask out to him.
“Take a sip of this.  Make you feel better.”
“Don’t mind if I do,” Prophet said with irony, and took a long pull from the flask.
The whiskey had such a soothing effect on his cracked skull that he went ahead and polished it off.  He tossed the empty flask high in the air.  It landed somewhere behind him with a dull thud.
The half-breed Apache called A.J. ground his jaws and took a step toward Prophet, aiming his rifle at the bounty hunter’s head.
The old man held his arm out.  “Stand down, fellas.”
He kept his gaze on Prophet.  “I want you to ride over to Muleville and kill a man named Melvin Badthunder.  Half-breed Comanche.”
“How did this hombre Badthunder get your neck in a hump?”
“He killed my son,” the old man said, his eyes hard.  “I want you to bring his dead carcass--or just his head, if that would be easier--back to me for incontrovertible proof that you’ve accomplished the task I’ve given you.  Then, and only then, after I’ve seen that devil’s walleyes staring up at me, with every ounce of his life drained out and his spirit screaming in the butane fires of hell...will I open that door to the mine, and set free your comely partner.”
Prophet probed the growing goose egg on his temple with his fingers.  “You got some bad information, friend.  You see, I’m a bounty hunter, not a regulator.”
“Touche,” said the old man.  “And I’m offering you a bounty.  The living head...and very pretty body...of Louisa Bonaventure in exchange for the dead head of Melvin Badthunder.  That sounds like a pretty fair reward to me.  Doesn’t it to you, boys?” the old man asked his men.
They all shrugged and nodded.
“Doesn’t it to you, Mr. Prophet?”
Prophet told the old man to do something physically impossible to himself.  And then he gained his feet heavily and stumbled over toward where Mean and Ugly was still grazing by the burned out barn.
Behind him, the old man said, “Better hurry, Mr. Prophet.  She’s far too pretty to leave moldering in that cold, dark mine shaft without any food or water!  Far too pretty for snake bait!”
The old man and the others laughed.