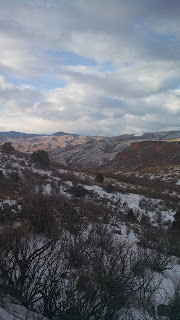 [Dec. 25--Due to inebriation and general sloth and absent-mindedness, I forgot to mention a couple of things, so I've added some short paragraphs at the end of my summing up.--Mean Pete, his own fool and nasty self]

This is the view from above Mean Pete's floozy- and cur-infested lair this Christmas Eve morning at the end of a busy year.

See out there toward the Mummy Range?

That's where all of Mean Pete's characters are holed up together for Christmas, in a big timber cabin, preparing elk roasts and plum pudding, and jawboning about their recent adventures.  Probably complaining a little about all the nasty stuff that Mean Pete has put them through this year--Colter Farrow running into the "No-Account Girl" and nearly getting his wick trimmed by bounty hunters, for one...

Yakima Henry helping a beautiful woman with a dark secret and a husband with a gnarly past and a pack of human coyotes on his trail (Dead Man's Trail).

Wilbur Calhoun having to contend with a young lawman who says he's Wilbur's long-lost son.  The young lawman discovers old Wilbur's hideout up in the San Juan Mountains and thinks he's going to arrest old Wilbur for killing the lawman's ma half a lifetime ago ("Old Gun Wolf").  Wilbur might be old as the hills, but he has other ideas for the whipper-snapper lawman...  Ha!

And then there's poor old Spurr Morgan who even with his weak ticker was sent after a pack of wild savages called The Vultures in The Last Lawman.

Lou Prophet and his beautiful blond sidekick Louisa Bonaventure were on the run from Apaches and two different gangs and ended up in a remote desert ghost town with a curse on it.  Louisa not only ended up in the hands of some lusty bank robbers but Lou Prophet found himself tossed into a deep pit with the moldering bodies of three murdered deputy U.S. marshals!

(I bet Miss Louisa would really give Mean Pete an earful about that little misadventure that Mean Pete put them both through in The Devil's Laughter!  Mean Pete was really snickering when he was hammering that one out.  Don't tell Louisa!)

Then there was the Rio Concho Kid in "Bullet for a Virgin" and Yakima Henry (again) in the horror-western yarn that came out around Halloween, "The Canyon."

Boy, I can just hear those main and secondary characters comparing notes and wagging their heads over all their misadventures this year, while Lou Prophet and Yakima Henry arm wrestle and Louisa swills her sarsparilla and old Wilbur Calhoun adds a liberal jigger of who-hit-john to his six-shooter coffee.  Ben Stillman, Doc Evans, Jody Harmon and Leon McMannigle (The Ben Stillman novels) are probably playing cards under a smoky lamp while Stillman's wife, Fay, and Crystal Harmon peel potatoes and carrots to go along with a big roast.  Crystal says, "I just hope that awful Mean Pete eases up on us a little this year.  If he doesn't, I for one am rebelling--are you with me Fay?!  I say we put a little extra starch in his shorts!!"

All in all, 2012 has been a rousing good time for Mean Pete but probably not so fun for his characters.  But Mean Pete hopes his readers have enjoyed the (mis)adventures as much as he enjoyed writing them.

Stay tuned.  There are many, many more adventures to come in 2013, and in the mean time, Mean Pete will be trying to stay one step ahead of Miss Bonaventure.  That nasty little gal would love to get her hands around Mean Pete's wicked old neck, and if she ever did, there'd be hell to pave and no hot pitch!

See you on over the divide in 2013, pards.  Gidyup from that nasty old Mean himself!

[As has been pointed out, I forgot to mention my two best-selling short-stories--"Poison Mean" and "The Lonely Widow."  Not only did I put the nasty outlaw Chet Villanova through some mean and nasty misery with a pretty blond and a passel of rattlesnakes, and involve Gideon Hawk, the Rogue Lawman, with another 'No-Account girl' and some stolen stagecoach loot, but I forgot to even mention their trials and tribulations.  Colter and Gid, forgive old Mean Pete, will you.  Keep in mind that while you're out shootin' an' cavortin' with fallen wimmen an' such, Mean Pete's been swilling beer and cheap wine and eating way too much this holiday season.

Speaking of Colter Farrow, he'll have a whole new novel out about him in April--Bad Justice.  I intend to write another Gideon Hawk book over the summer and if Berkley or no one else wants it, Mean Pete will publish it himself!] 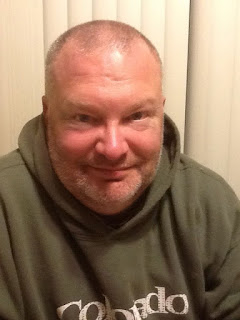