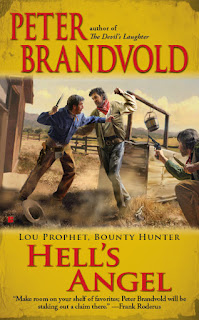 I just finished going over the galley proof of my next Lou Prophet book, due out in June.  Since I wrote about how to start with action and weave in background information as concisely as possible so as not to stop the action or even slow it much, I thought I'd show you how I did it in this book.  Here, I try to mix action, dialogue, and background information as craftily as possible, drawing the reader into the tale.

“Dios mio!” the senorita said through a gasp. “Lou, you must go! My husband is home!”

The senorita gasped when another sound rose from the hotel/saloon’s first story, and clamped her hands to Lou Prophet’s face. She stared up at him, chocolate eyes wide and bright with terror. She squirmed beneath him. Her full breasts raked warmly against his chest.

“Lou, vamonos! He is an angry man! Very jealous! If he sees us together, he will keeel you!”

Lou Prophet stopped bucking against the lovely puta, Ramonna Oscuro, whom he’d met a couple of years before, here in the little border village of San Simon, when he’d been on the run from the federales. He stared down at her, incredulous.

It was deep night, but downstairs, in the hotel’s little cantina, boots thudded. A contented whistling sounded. It stopped.

The man’s burly voice barreled up the stairs in Spanish, echoing off the mud brick walls--“Hola, my hot little chili pepper--your husband is home!”

“Shit!” Prophet said, scowling down in disbelief at the frightened puta. “That ain’t Colonel Campa, is it--commander of the local rurale outpost?”

“Si,” Ramonna said, nodding, as boots tapped slowly, heavily on the stone stairs. “He is very jealous man, Lou! He married me to keep me pure, though I have it on good word he still tumbles with any girl he gets heated up for!”

“Didn’t mean to. Meant to cut his throat, but I was too drunk to see straight. He said if he ever saw me in Mexico again he’d see me shot down in front of the nearest adobe wall.”

Prophet stepped into his balbriggans, drew them up his legs, having to squat and wriggle around to get the skin-tight, threadbare garment up his thick, brawny, six-foot-four-inch frame without ripping out the seams. “Lost him two days ago. Didn’t figure on him thinkin’ to look for me here--in the same little village he’s headquartered in!”

The Colonel’s deep voice, slurred from drink, shouted, “I have brought you a present, my little mountain flower!”

Prophet glanced at Ramonna skeptically as he scooped his denim trousers off a chair back. “Mountain flower?”

“He’s quite a poet, the bastardo! I only married him because I was tired of going from man to man, and I was drunk. I’m not as young as I used to be. I’ll be twenty next month. The years catch up to us all. Hurry, Lou--he’s in the hall!”
at February 12, 2013