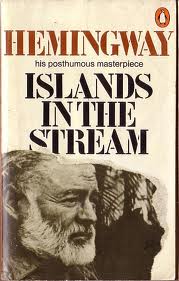 Normally, opening with description is a static, dead, dull thing to do.  It's the death of openings.

But that's really only because description in the hands of mere mortals doesn’t usually leap off the page and wrap a fist around your brain and show you a scene as clearly and vibrantly as it does here in the hands of Ernest Hemingway.  This isn’t the very opening of Hemingway’s ISLANDS IN THE STREAM, but it’s only a few paragraphs in.

When you can write with this kind of lens-like clarity, so that the page you’re reading is even clearer than the world you’re reading it in, you can do any damn thing you want.

I’ve learned a lot from this book and from everything Hemingway wrote, including what's considered the not-so-good stuff.  What I always thought was striking about this piece of writing was not only all the razor-edged nouns and verbs painting the pictures, but the rhythm of the sentences:

He had a big pile of driftwood stacked against the south wall of the house.  It was whitened by the sun and sand-scoured by the wind and he would become fond of different pieces so that he would hate to burn them.  But there was always more driftwood along the beach after the big storms and he found it was fun to burn even the pieces he was fond of.  He knew the sea would sculpt more, and on a cold night he would sit in the big chair in front of the fire, reading by the lamp that stood on the heavy plank table and look up while he was reading to hear the northwester blowing outside and the crashing of the surf and watch the great, bleached pieces of driftwood burning.

Sometimes he would put the lamp out and lie on the rug on the floor and watch the edges of color that the sea salt and the sand in the wood made in the flame as they burned.  On the floor his eyes were even with the line of the burning wood and he could see the line of the flame when it left the wood and it made him both sad and happy.  All wood that burned affected him in this way.  But burning driftwood did something to him that he could not define.  He thought that it was probably wrong to burn it when he was so fond of it; but he felt no guilt about it.

As he lay on the floor he felt under the wind although, really, the wind whipped at the corners of the house and at the lowest grass on the island and into the roots of the sea grass and the cockleburs and into the sand itself.  On the floor he could feel the pounding of the surf the way he remembered feeling the firing of heavy guns when he had lain on the earth close by some battery a long time ago when he had been a boy.

The fireplace was a great thing in winter and through all the other months he looked at it with affection and thought how it would be when winter came again.  Winter was the best of all seasons on the island and he looked forward to it through all the rest of the year.
at March 02, 2013