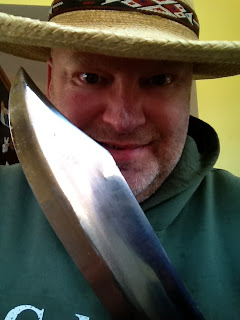 [I've slacked off on the writing tips lately mainly because I've been writing so hard on the next Rogue Lawman--HEED THE THUNDER!  The tips will be back sporadically, so keep your eyes skinned.]

I've been told by more than a few readers that they love how fast my books read.  I blush like an Amish bride on her wedding night when I hear that.  Because a fast pace has always been something I've striven for and keep striving for.

I learned to do it by simply not staying too long with any one fictional element.

Here are the main elements of a novel:

I try never to stay too long with any one of those things.  I mix them up.  A lot.  Dialogue by its very nature reads fast but a conversation will slow down if you stick with it too long.  So don't have your characters sitting around too long "chinning," as they say in the Old West.  Or yakking it up.  The reader will get tired of it.  He'll feel bogged down.

And bogging down your reader will get your book turned into the used book store faster than you just read this sentence.  And he'll think twice about buying your next one.

During and on both ends of conversation, throw in some description or narration or reflection or even a little background.  But beware of background and reflection.  Both, while necessary, stop the forward action, and you don't want to do that.  The novel is a shark.  It needs to keep swimming, moving, feeding, or it will die.  You want to keep those two elements to only a few sentences here and there.  Never write more than four or five sentences of background or reflection in any one spot, because that'll stop the reader cold.

And the last thing the reader wants is to be stopped cold.  Remember that book exchange!

Do the same with narration and description, too.  Mix it up.  Throw in some dialogue or little pieces of reflection and background.

The one element you can get by with fairly large chunks of is action.  As long as it's violent and vivid.  But it has to be violent and vivid--with colors, sounds, smells, anxiety, aches and pains.  Make the reader share in it with all his senses.  If the point of view character gets shot, make the reader feel the bullet tearing off his pinky!

By never sticking too long with any one element except violent action--and by "too long" I mean over a few sentences apiece--you'll give the reader the sense of what he wants most--a breakneck pace.  Or at last a fast jog.

He'll get the sense of the pages damn near turning themselves!

Remember, the average reader doesn't give a rat's incisor about any of those elements I just listed.  He just wants to be transported into the world you're creating one word at a time.  He wants to disappear into the story, into the movie you're directing in his head, and see how it all turns out.

He essentially wants to enjoy what's happening and then go onto what happens next and enjoy that just as much. Because that's what reading for entertainment is all about.

Now, I've said as much as I need to, so I'm signing off with a sneaky little teaser from HEED THE THUNDER, which should be available on Monday:

Hawk rolled away from the handcart to the other side of the barrel cactus.  The three remaining shooters stood crouched and firing their rifles from their hips.
They’d lost rack of Hawk for three vital seconds.  The Rogue Lawman took advantage by shooting out from the right side of the barrel cactus.  His aim was muddy from this position, however, and he managed to clip one man only in the knee.  By the time he’d emptied the Henry, he’d wounded only one more.  Tossing the empty rifle aside, he pulled both pistols.
Lead hammered the ground in front of him.
The smell of cordite was pepper on the breeze.
Hawk pulled his head back behind the cactus as two bullets plunked into it, spraying pulp and thorns.  Hawk triggered his Russian around the cactus’s left side.  The bullet clanked off a rifle and plowed into the jaw of one of the shooter’s who screamed and dropped his weapon as he buried his face in his hands.
The two others were backing up, eyes bright with anxiety, apparently looking for cover behind them.
Hawk aimed his Colt carefully around the right side of the cactus, and drilled one of the retreaters in the belly.  As that man folded like a jackknife, bellowing curses, Hawk drilled the other one in the left shoulder.  As the man screamed and jerked back, Hawk’s Colt leaped and roared again.  The bullet slammed into the man’s neck, just right of his Adam’s apple.
The shooter dropped his rifle and twisted around and fell.  He rolled over onto his back, rose to a half-sitting position, and tried bringing his rifle up once more.
Hawk gained a knee, aimed the Colt carefully.  The wounded shooter stared at him, terror in his wide-open eyes.  He opened his mouth to scream.  The Rogue Lawman’s next shot shattered the man’s front teeth and shredded his tongue before blowing out the back of his head.
at April 26, 2013