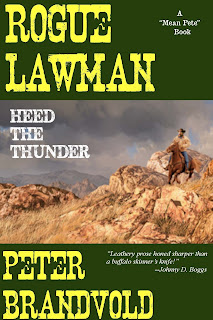 This is from about halfway through the book:

Hawk’s grulla mustang crossed the arroyo easily though it had some trouble climbing the steep opposite bank that was slick with still-wet clay.  The horse’s hooves slipped, and as it fought for traction, the mustang’s lungs wheezed like a blacksmith’s bellows.
At the top of the bank, Hawk stopped the horse, giving him a rest, and looked around.
To his right, a saguaro leaned out over the wash.  The night before, the lip of the wash had eroded enough to uproot the cactus.  Now, amongst the bone-colored roots that had been partially torn out of the ground, something glistened in the afternoon sunshine.
Something Miller had left behind?  Possibly a canteen?
Hawk swung down from the saddle, dropped to a knee beside the saguaro, reached through the roots, and took hold of the object.
He saw right away that whatever it was couldn’t have belonged to Miller, for it was too deeply entangled in the saguaro’s roots.  However, curiosity urged him to disentangle the roots until he was holding before him a badly dented and rusted Spanish-style helmet from which the rain had washed away some of the mud.  Despite the weathering, Hawk recognized the headgear by its flat, narrow brim and the high crest, like a rooster’s comb, running from front to back.
Only one cheek guard clung to it.  The other was likely entangled deeper in the root ball, or maybe it had long ago been blown or washed away in rains similar to that which had ravaged this desert the night before.
Hawk ran his hands along the helmet’s flaking metal brim.  Finding these ancient artifacts always gave him a chill.  They reminded him how small and insignificant he was.  Even how small and insignificant his misery was--merely one clipped scream amongst the barrage of screams and long, keening wails that comprised all of human life on earth from the first mortal forward.
He peered through the claw-like chaparral toward the castle-like Superstitions rising in the south.  He’d heard that a rich Mexican whose family had owned a sprawling rancho had come north on a gold-scouting expedition about forty years ago.  Don Miguel Peralta had been chasing a legend that the Apaches had told Coronado about a vein of almost pure gold in the high, rugged range two hundred miles north of what is now the U.S./Mexico border.
Discovering that the vein was more than mere legend--that the nearly pure gold did, in fact, exist--Peralta recruited several hundred peons to work his “Sombrero Mine” deep inside the Superstitions, and over the next three years he shipped home by pack train millions of pesos worth of nearly pure gold concentrate.
Hawk looked down at the helmet in his hands.
Could he be holding the headgear of one of Coronado’s men who, exploring this country in the sixteen hundreds, first became privy to the Apache story of almost-pure gold?  The gold that Don Peralta mined two hundred years later, and ended up selling his life to the Apaches for?
Dust and bone...
Hawk heard a scream.  Loud and shrill, it came from inside his own head.  It was the scream of his wife when Linda learned that their boy, Jubal, had been taken off the school playground and hanged by Three-Fingers Ned Meade.
Hawk tossed the helmet aside, swung up onto the grulla’s back, and continued south toward the stage road and, he hoped, more sign that he was on the trail of Pima Miller.
The wind wasn’t blowing, but the rogue lawman could smell blood on the breeze...
at April 07, 2013