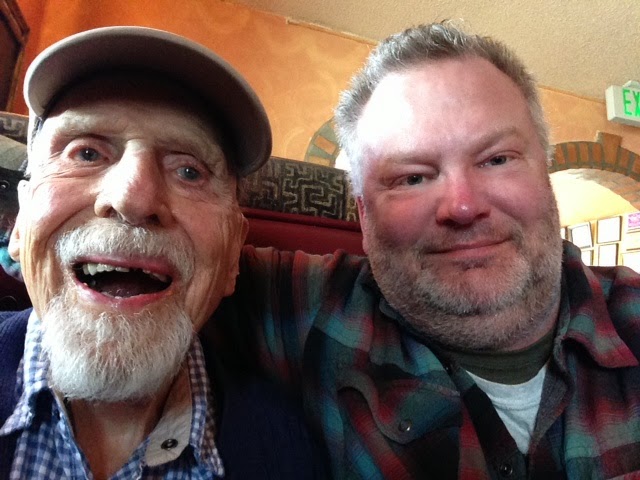 Amazing what happened 70 years ago. All those young men barreling onto the beaches under heavy machine gun fire, watching their friends cut to shreds in the water and on the sand before they could climb the cliffs. Incredible bravery. I stand in awe of those tough old salts, the ones that didn't make it and the ones who did. When I was a kid, I read every book I could find on the subject of the D-Day Invasion, including most of the books of Cornelius Ryan. Fortunately, that's all the closer I've ever gotten to warfare. I don't know if I'd have the cajones to do what they did. Probably not. The fellas were made of firmer fiber that most of us today, unfortunately.

I hope young people continue to reflect on that time in our history and to read the books on the subject. They probably don't realize it, but if it weren't for those soldiers, we in all likelihood wouldn't be here, living the extremely cush lives we take for granted today.

This is me and my neighbor Karl Stefan, who was not part of the invasion but he was a fighter pilot in the South Pacific. Crashed and burned on an aircraft carrier, burned off part of his face and nearly all of one ear. Lived to go ballooning with Malcolm Forbes all over this country and Europe. I met him about 13 years ago, when he was still hiking up Horsetooth Mountain three times a week. He's nearly blind from macular degeneration and near entirely deaf from all those night missions in the incredibly loud cockpit of a Wildcat fighter plane. (The Navy hadn't thought yet about ear protection…)

Anyway, my hat is off to all the WWII vets, including Karl. I hope yours is, too.

And here's my favorite essay of all time. It's by Ernie Pyle, one of my favorite writers of all time. Ernie Pyle was a war correspondent during WWII. He was there on D-Day, storming the beaches with the soldiers. A sniper's bullet killed him in the South Pacific. "The Death of Captain Waskow" is a classic, still brings tears to my eyes and a lump in my throat. Everyone should read it today and continue to read it in the years ahead, as we get farther and farther from that horrible war, so we never forget about it or the men who fought and the men who gave their lives.


FRONTLINES IN ITALY-In this war I have known a lot of officers who were loved and respected by the soldiers under them. But never have I crossed the trail of any man as beloved as Capt. Henry T. Waskow, of Belton, Texas.

Captain Waskow was a company commander in the 36th Division. He had led his company since long before it left the States. He was very young, only in his middle 20's, but he carried in him a sincerity and a gentleness that made people want to be guided by him.

"After my own father, he came next," a sergeant told me.

"He always looked after us," a soldier said. "He'd go to bat for us every time."

"I've never known him to do anything unfair," another one said.

I was at the foot of the mule trail the night they brought Capt. Waskow's body down the mountain. The moon was nearly full at the time, and you could see far up the trail, and even part way across the valley. Soldiers made shadows as they walked.

Dead men had been coming down the mountain all evening, lashed onto the backs of mules. They came lying belly-down across wooden pack saddles their heads hanging down on the left side of the mule, their stiffened legs sticking out awkwardly from the other side, bobbing up and down as the mule walked.

The Italian mule-skinners were afraid to walk beside dead men, so Americans had to lead the mules down that night. Even the Americans were reluctant to unlash and lift off the bodies at the bottom, so an officer had to do it himself, and ask others to help.

The first one came early in the evening. They slid him down from the mule and stood him on his feet for a moment. In the half light he might have been merely a sick man standing there, leaning on the others. Then they lay him on the ground in the shadow of the low stone wall alongside the road.

I don't know who that first one was. You feel small in the presence of the dead men, and ashamed at being alive, and you don't ask silly questions.

We left him there beside the road, that first one, and we all went back into the cowshed and sat on water cans or lay on the straw, waiting for the next batch of mules.

Somebody said the dead soldier had been dead for four days, and then nobody said anything more
about it. We talked soldier talk for an hour or more. The dead man lay all alone outside, in the shadow of the stone wall.

Then a soldier came into the dark cowshed and said there were some more bodies outside. We went out into the road. Four mules stood there, in the moonlight, in the road where the trail came down off the mountain. The soldiers who led them stood there waiting. "This one is Capt. Waskow," one of them said quietly.

Two men unlashed his body from the mule and lifted it off and lay it in the shadow beside the low stone wall. Other men took the other bodies off. Finally there were five, lying end to end in a long row alongside the road. You don't cover up dead men in the combat zone. They just lie there in the shadows until somebody else comes after them.

The unburdened mules moved off to their olive orchard. The men in the road seemed reluctant to leave. They stood around, and gradually one by one you could sense them moving close to Capt. Waskow's body. Not so much to look, I think, as to say something in finality, to him and to themselves. I stood close by and I could hear. One soldier came and looked down and he said out loud, "Goddammit."

That's all he said, and then he walked away. Another one came. He said "Goddammit to hell anyway." He looked down for a few moments, and then he turned and left.

Another man came; I think he was an officer. It was hard to tell officers from men in the half-light, for all were bearded and grimy dirty. The man looked down into the dead captain's face, and then he spoke directly to him, as though he were alive. He said:

Then a soldier came and stood beside the officer, and bent over, and he too spoke to his dead captain, not in a whisper but awfully tenderly, and he said:

Then the first man squatted down, and he reached down and took the dead hand, and he sat there for five full minutes, holding the dead hand in his own and looking intently into the dead face, and he never uttered a sound all the time he sat there.

And then finally he put the hand down, and then reached up and gently straightened the points of the captain's shirt collar, and then he sort of rearranged the tattered edges of his uniform around the wound. And then he got up and walked away down the road in the moonlight, all alone. 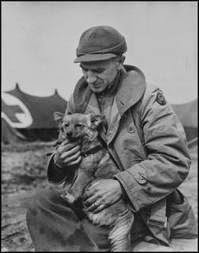