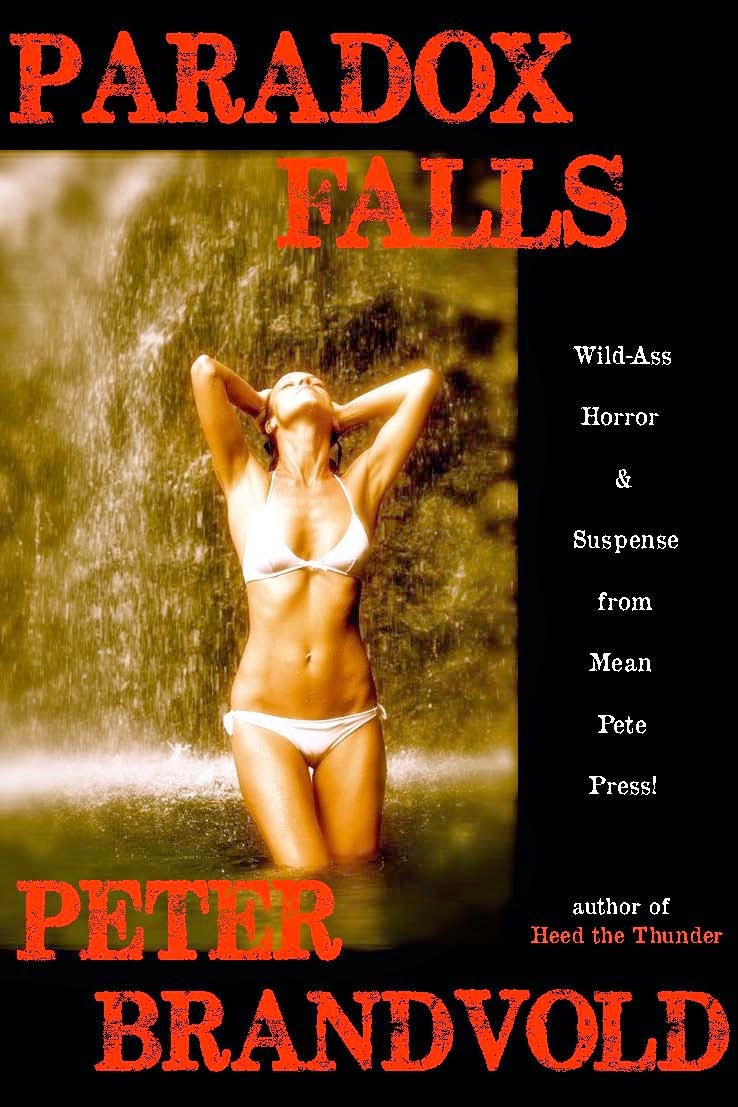 Over the next week or so, I'm going to publish the first several chapters of my horror novel. This is my first novel-length yarn that is not a western, and I'm very happy about how it's turning out…so far. I hope to have the book up and running sometime in June, definitely by July 1…along with my next western, THE DEVIL'S SEVEN, a new Lou Prophet tale.

BRENDA HELD HER THUMB and index finger an inch apart above the table in Denny’s.  “I’m about that much jealous.”
“That’s too much,” Jake said.
Brenda slid her thumb and index finger a little closer together.  “How ‘bout that much?”
Jake reached out and closed his hand over Brenda’s.  “Still too much.  You have absolutely no reason to be jealous of Kristen Whitfield.”
“Oh, please.”
“How many times do I have to ask you to join us?”
“How ‘bout once more?”
Jake smiled, brought Brenda’s hand to his mouth, and pressed his lips to her knuckles.  “Join us.  Please join us.  Please, please, please--oh, Brenda, won’t you please join us?  The trip won’t be complete without you!”
An elderly couple sitting at a table to the left of Jake’s and Brenda’s booth gave him the stink-eye.
Jake smiled at them.  “Sorry if I was being overly ebullient.  It’s just that I really want my wife to join myself and my friends on our trek to Paradox Falls.”
The old lady looked quickly away.  The old man looked at Brenda.  A lusty gleam sparkled in his watery blue eyes behind his glasses, and he turned back to Jake and said, “How could you leave one like her behind?”
Jake felt his ears warm.  Abashed, he glanced down at his coffee and the heavy, oblong platter containing the remains of his Grand Slam breakfast, and said, “Touche.”
“Three’s company, four’s a crowd,” Brenda told the old man, who looked dubious.
“That’s not true and you know it,” Jake told her.
Brenda slid out of her booth across from Jake.  “Excuse me,” she told the old couple, and then slid into Jake’s booth, wrapping an arm around his neck.  The old man lifted a corner of his mouth as he appraised Brenda’s ass, and the old woman snarled at him.
“I’m three-quarters joking,” Brenda said.  “You three are old friends.  I mean, you went to high school together, for God sakes!  You’ve known me how long?  Two years?”
“And your point is...?”
“My point is that whenever the four of us are together--Kristen, me, you, and David--I feel like one too many hands on deck.”  Brenda shook her head to cut off Jake’s objection.  “And that’s perfectly natural, honey!  It’s not a whole lot of fun for me, but it’s only natural.  And that’s why I will not under any circumstances join you three on your hike to the Falls.  I know it’s a yearly tradition for you guys, and traditions are important.”
“It’s a bi-yearly tradition,” Jake corrected her.
Over the last few years, Jake and his childhood friends, Kristen and Dave, hadn’t been able to squeeze their traditional hiking and camping trip--a trip they’d started making together when they were all just sixteen years old--into every summer but only into every other summer.  Jake was too busy with his writing schedule to take much time off these days, and Kristen had been taking summer school classes at the University of Colorado so she could move up the alumni relations ladder, and rake in a larger income.
Dave was kept hustling for his wholesale tea business.  It took a lot of scrambling, Jake suspected, for his old pal Dave--now known as David--to keep him and Kristen and their two girls and matching black labs in their fancy digs up Boulder’s exclusive Four Mile Canyon.  They shipped one girl off to a prestigious ballerina school every summer while the other one was bussed up to an equestrian camp somewhere in the wilds of Montana.
“Okay, bi-yearly,” Brenda said.  “All the more reason I shouldn’t intrude.  You three don’t get as much time together as you used to.  Besides, I used up all my vacation time last winter.”  She’d spent January in Pennsylvania, helping her sisters and brother move their dad into a nursing home.
“Now I feel guilty.”
“No reason to feel guilty.”  Brenda kissed Jake’s cheek.  “As long as you’re not still in love with her.”
“With who?”
“With who?”  Brenda leaned away from him.  “Now, I am worried!”
“Come on,” Jake said, feeling uncomfortable.  “That was a long, long time ago.”
“Yes, but she was your first one.  There’s no getting over your first.  I know that as well as anyone.”
“Oh, you do, do you?”
The old couple looked at Jake again.  He smiled and waved and turned back to Brenda, lowering his voice a notch.  “Roy What’s-His-Name?  You still got a thing goin’ on for ole Roy, do you?”
“Sure, I do.  Just like you got a thing for Kristen.  But you know what makes me happy?”
“What?”
Brenda kissed Jake’s cheek again.  “It makes me happy that David is feelthy steenking reech!”
Jake was incredulous.  “What the hell’s that supposed to mean?”
Brenda laughed.  “It means I doubt very much that Kristen would be willing to give up her mansion and pool up Four Mile Canyon to live on your income in the Breezy Hills Townhome Estates.”
“Hey, I’m not that poor!”
“Your wonderfully poor.  But don’t be offended.”  Brenda brushed her nose against Jake’s chin.  Her dark-brown Czechoslovakian eyes crossed slightly as she gazed up at him.  “I’m madly in love with everything about you, including your poorness.  I just hope you’re in as much love with me as I am with you.  If not, I’m gonna put the hurt on you, pal!”
She tightened her fingers over his thigh.  She had strong hands.
Jake held her close against him.  “More.”  Ignoring the old lady’s reproving glare, Jake nibbled Brenda’s ear.
“Stop,” she said, giggling and squirming.  “You’re making me horny.  Come on--let’s you get up Four Mile so I can get back to work.”
As Jake and Brenda made their way to the cashier, Jake glanced back to see the old man craning his neck to stare at Brenda’s ass.  The old lady snapped him with her napkin.