C.L. Moore Takes it to the House!

Sorry about that, but it's football season, and while I don't care for the game the way it's played on both the pro and college levels anymore--it's an over-hyped business not a game!--I do tend to have the games on, and the lingo infiltrates my brain.  But this post is about the late, great C.L. Moore, whom I've been rereading lately.

Catherine L. Moore was probably the first woman to write over-the-top sword and sorcery stories, and she was a contemporary of Robert E. Howard's, publishing her own equally great pulp in Weird Tales back in the 30's and 40's.  I like Howard a lot, but I think I like Moore even better because, as written on the back cover of the Planet Stories edition of her Northwest Smith yarns: "Moore revealed a vast imagination, beautifully descriptive prose, and a throbbing sensuality rarely matched by her male counterparts."

That's not an exaggeration.  I read her most famous Northwest Smith tale again last night--"Shambleau"--and sat marveling at the nimble way she fashioned sentences, bringing scenes and emotions to dazzling life.  These are essentially westerns set on Mars and Venus and other planets as they were imagined back in the pulp days, but they're westerns with an otherwordly eroticism and mystical charm that no one ever did better than Catherine L. Moore. 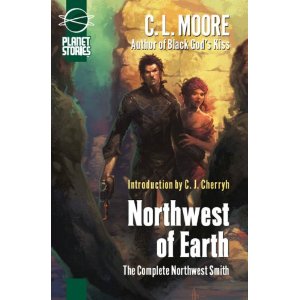