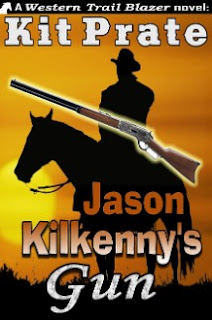 I do so much reading, sometimes wading, through so much fiction and nonfiction that I sometimes forget what truly great writing looks like.

When I read this over-the-top wonderful western novel, first published by Tower Books back in 1981, with a cover that did nothing to set it off from the rest of the pack so was promptly forgotten, I was reminded that words and sentences in the hands of a great or near-great writer can pack the wallop of a quick-jabbing boxer.  Good writing is hard to define, but you know it when you read it.  You sort of hold the book a little tighter, and all the sights and sounds of the world beyond the book grow dimmer and quieter, and you feel the throb of life a little deeper in your bones.  (Now, that's an interactive medium--screw the video games!)  And it makes me, at least, want to try to write half that well myself!

JASON KILKENNY'S GUN has a theme similar to that of SHANE--a young man's hero-worship of an older man good with his shooting irons.  Only, JASON KILKENNY'S GUN is better than SHANE.  It's rawer, meaner, more humane, more intense, and more emotional and violent than SHANE.  It grabs you by the throat and it makes you grit your teeth while you wait to see what happens between the boy Josh, his father and his uncle and the brutal bounty hunter, Rance Savage, who rides so unexpectedly into their lives and changes them all forever.

In SHANE, we pretty much know what's going to happen, don't we?  I mean, it's Disney.  In this book, we don't.  And we're damn worried.  JASON KILKENNY is a cross between George Stevens and Sam Peckinpah with a good dose of the existential grittiness of DEADWOOD tossed in.

Here's how well Kit Prate (who's a woman, I feel compelled to add) handles violence.  It's an example of the fine writing from an intense scene (from the "teaser" at the front of the original Tower publication:

Josh rose up from his chair.  He stood, transfixed, watching Savage.  The manhunter was talking, his voice soft, and as he talked, the other men at the bar began to back away.  And then there was only Savage; Savage and the cowhand.


The cowboy panicked.  He reached out suddenly with his right hand, sweeping the glass from the bar.  "You ain't takin' me, Savage.  Goddamn you!  You ain't takin' me!"  He backed up half a step, his left hand dropping to his holster.


The cowhand never completed the draw.  Savage reached out with his left hand, smashing the whiskey bottle against the bar.  Savage's massive right hand closed tight around the cowpuncher's gun arm.  Forcefully, he pulled the man to him, as if he were lifting a rag doll.


There was a scream.  Sudden, high-pitched, like an animal in great pain.  There was a growing circle of red on the cowboy's shirt; bright red, just above his belt buckle.

Here's how she handles sex between the young man, Josh, and a whore.  *(To warn the squeamish, this is vivid!)*

The gates opened.  He emptied himself, pouring his seed into the girl, onto the crumpled sheets.  Again and again, the length of his stubborn hardness tingling with the same torturously pleasant itch of a thousand miniature electrically charged fingers.  It was even better than before; more intense.


Satisfying.  He withdrew himself and rolled off the girl, welcoming the feel of the mattress at his back.  He was at once exhausted and completely exhilarated.


The girl sat up, searching among the blankets for her clothing.  Her hand disappeared beneath the coverlet, and she laughed, withdrawing the bottom half of the boy's longjohns.


They dressed in silence, suddenly shy at their nakedness, their backs to each other.  Josh felt the girl's fingers on his neck, and he leaned into her touch.  "Leona," she said, working the curl at his ear between her fingers.  "My name's Leona."  She was quiet again, stroking his neck.  "I want you to come again, boy."  She laughed then, muffling the sound with her closed hand as she realized the double meaning in her words.  It was no lie.  She did want him to come again.  To her.  In her.  "You hear me, boy?"

JASON KILKENNY'S GUN is, for my money, one of the four or five best westerns ever written, and Kit Prate, who lives in Wisconsin with her kids and grandkids and will admit to not being a spring chicken anymore, deserved to be more prolific and would have been if she hadn't had to work a more dependable and predictable job to feed her family.  Well, now she's retired from the BIA, and I hope she continues to give us more books like JASON KILKENNY.  You can find most of her stuff, including another great one LONG RIDE TO LIMBO, published by Western Trail Blazer, on Amazon.