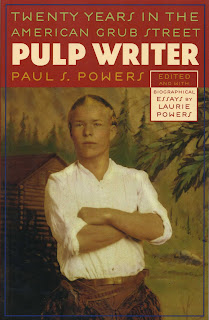 This is one of the most enjoyable books I've read this year--an autobiography by a writer who wrote for the pulp magazines of the 30's and 40's.  Mostly western pulps, but Paul S. Powers wrote a little bit of everything.

I have to admit that I have not yet read any of Powers's fiction--I have the recent collection of his short work, RIDING THE PULP TRAIL, on the way--but I found his autobiography a real gem.  It's written in a simple, rather charming style that seems very contemporary though it was written back in the 40's.  It's full of colorful anecdotes illustrating the tough row that Powers hoed on his way to becoming a published writer in that harrowing economic period of the last century.  After growing up in Kansas, he lived the hard life of the working writer, roaming the Southwest, as fiddle-footed as any Western hero.

Powers leaves a lot out of this memoir--his bouts with alcohol and depression, family feuds, failed marriages--but his granddaughter, Laurie Powers, fleshes all that out in her introduction, which, believe me, does not at all smack of hero-worship as you might expect from a granddaughter writing about her grandfather.  (And, truth be told, makes me a little glad I don't have any grandchildren myself!)  She is sometimes disarmingly frank about his problems.  ("Grandpa, from what I knew, was erratic, moody, and withdrawn...")  And to my mind she a little unfairly compares him to his more "gregarious" and "successful" brother, George, who became a psychiatrist, but I reckon that's my own toes feeling stepped on.  If he'd been gregarious, he'd likely have never been a writer...

Laurie also explains how she discovered her grandfather's work in the first place a long time after his death in 1971.  Both her introduction and Powers's memoir together reveal the complex life a very complicated, troubled, and amazing man.  It also depicts how he and his family both suffered for his craft.

Other writers like myself can probably empathize and sympathize better than anyone else.
at September 23, 2011