It Takes an Englishman (and Peckinpah) 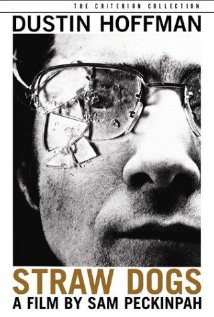 I feel like an ambulance chaser.  I went to see the modern version of this brilliant movie today merely to see the gore.  Not the gore in the movie.  Gore in movies I became inured to after seeing THE EXORCIST when I was 12 and then had to get up early the next morning--January in Wahpeton, North Dakota, 42 below--to deliver papers all by myself in the bone-chillingly cold darkness with every adult in town, including my own parents, sleeping off hangovers incurred at the Elks Club the night before.  Believe me, I replayed the green barf and levitation scenes so many times in my head that by the time I was done plowing through hip-deep snowdrifts, my brain was as numb as my toes.

No, the gore I'm talking about here is the gore of another bad Hollywood remake.  This time a remake of one of my favorite Peckinpah movies.  Yep, they screw it up bad.  Really bad.  This one should have been titled THE DUKES OF HAZARD MEETS HOLLYWOOD 90210.

It's just so freakin' unimaginative and predictable.  Oh, crackers, of course!  Why didn't Peckinpah think of using the crackers so much closer to home as villains than those toothless, stout-swilling Brits!

The original is one of the few movies that really got under my skin in a nasty way, and stayed there.  It's one of those "taboo" type movies that grabs every male watching it by the balls, and squeezing hard by asking:  "What would you do, mate?"

This one doesn't ask any of those questions.  The rape scene, so powerful in the original movie because we know she likes it and is really wondering what life would have been like with the guy currently raping her and feeling a little disappointed that she hadn't married the idjit but also hating herself for, at the same time, having an orgasm...well, here it's just another rape scene.  We've seen 'em before a million times.  And all the power is drained out of this one by the quick-cutting between the rape and her weak-tit husband lugging a 30.06 around in the woods.  The rifle's almost bigger than he is, of course.  More the size of a certain appendage of the fella currently enjoying himself in his home...

I just hope no kitties or bambis were hurt in the making of this boring piece of crap.  Because not one deer deserved to die.  (Don't force me to join PETA!)  Now, the humans--I hope they suffered.  Especially James Woods.  I hope his indigestion after chewing every bit of scenery within sight stays with him a long, long time.

Let me sum up my review of this moronic sack of burning dog doo by making this observation, which I feel fully qualified to make:

No true American redneck would have enough initiative to wreak this much havoc.