Looking for the Dutchman's Secret Mine--An Excerpt from the New Rogue Lawman Novel! 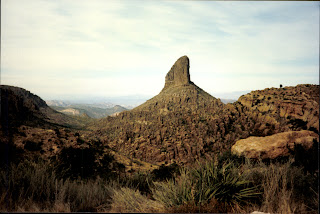 “Tryin’ to figure, huh?  I’m tryin’ to figure what in the hell ever got into me to listen to your wild story in the first place.  Now, not only do I not have a pair of saddlebags bulgin’ with nearly pure gold ore, but I don’t have that Rogue Lawman’s head in a gunny sack!”  Miller wagged his head from side to side, groaning.  “Did I say that head of his is worth twenty thousand dollars?  Did I say that?”
“I believe you might’ve mentioned it amongst all your other caterwauling,” Jodi said, holding the map in front of her but looking back over her left shoulder at the large, red pinnacle of El Sombrero.
The formation did indeed resemble a sombrero from this vantage--the steeple crown of the hat rising from a stark, red, boulder-strewn, cone-like mountain and presiding over the entire Superstition Range and the Salt River Valley, with the airy blue backdrop of Boulder Canyon to the southwest.
The vastness and starkness of the land here always took Jodi’s breath away.  It made her feel at once lonely and anxious but, also, knowing the ancient mine that the land contained, like a jewel clamped in the palm of a giant fist, it made her giddy and eager.  It made her heart tap-tap-tap-tap, like an Apache war drum, in her throat, in her ears...
But, now, if she couldn’t find it, knowing that she’d been so infernally close, maybe within only two hundred yards after waiting for the old man to die or for her to work up the gumption to leave him behind and ride out here alone and chip off what she could from the precious jewel and then head for far, far better climes--the disappointment would be a bottomless well.
She’d never stop falling into it.
If she couldn’t find the old Peralta mine, she’d put her pistol in her mouth and blow her brains out.
How could anyone go on living, knowing the riches they’d left behind?  She’d seen it!  After the Dutchman from Apache Springs had left with his two burros, she’d backtracked him, found the mine and explored it, seen the color in the walls.
It had been like the scales of a giant diamondback fashioned from raw, glittering gold!
--from HEED THE THUNDER, COMING MAY 1 FROM MEAN PETE PRESS!
at April 19, 2013