Bullet For A Virgin Now Available! 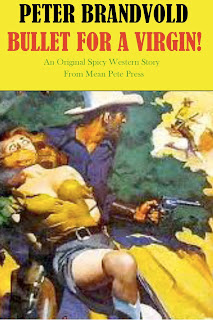 
ALL THE PULP WESTERN ROMANCE AND VIOLENCE OF YESTERYEAR MADE NEW AGAIN BY MEAN PETE PRESS!

BLOOD AND LUST IN OLD MEXICO...

In this first of a new series of spicy pulp western stories (roughly 30 printed pages) written exclusively as ebooks by Peter Brandvold and published by his own Mean Pete Press, the Rio Concho Kid must save a young Mexican girl from the savage intentions of the lusty General Constantine San Gabriel, who forced her into marriage.

On their wedding night, Tomasina De La Cruz sticks a stiletto in the General’s guts and flees his sprawling hacienda with the help of the half-Apache drifter, Johnny Navarro, a.k.a., “the Rio Concho Kid.”

The Kid and Tomasina race toward a rendezvous with the young man to whom Tomasina’s heart really belongs.  In so doing, Tomasina and the Kid must avoid a deadly trap set by the man whom the dishonored General hired to bring his young bride back so he could have her tortured and gunned-down by firing squad.

That man is the infamous, deadly bounty killer known only as El Leproso, the Leper!

Can the Kid prove victorious over his fiercest enemy and avoid falling in love with Tomasina, who is as beguiling as she is beautiful but who also harbors a bizarre, bone-chilling secret?