Uncle Vern and the Fourth of July 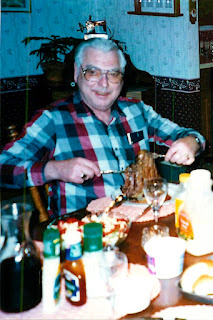 I’m about to pop a beer this Fourth of July in honor of my uncle, Vernon Meyer.
Uncle Vern.
I’m sure most folks, at least the lucky ones, have had an uncle Vern in their lives, and, if they’re even luckier, still do.  You probably know who I’m talking about.  “Uncle Vern” or "Ed" or "Mitch"--the uncle who stood out from all the other adults in your life when you were young because he still had a lot of the kid in him himself.
He was the uncle who, unlike so many other adults, we actually wanted to see and hang around with because he wasn’t one of the fussy brow-beaters.  Uncle Vern made us feel not only accepted but special.  He welcome us into his world which sort of straddled the line between childhood and adulthood.
He was the uncle who didn’t take life all that seriously.  He didn’t condescend to kids but treated us like equals.  He enjoyed the fun things in life as much as we did and wanted to share them with us “rascals.”
That uncle for me was Uncle Vern.
I’m thinking of my Uncle Vern this Fourth of July because he shared his Fourth of Julys with my wife and me right after Gena and I were married back in the early 90’s.  We spent a string of Fourths with him and Aunt Loueen and my cousins Wade, Mary, and Linda at their big, wonderfully cluttered and messy house teeming with beer, food, and friendly dogs in the beautiful, piney foothills of the mountains outside of Missoula, Montana.
How I miss those rollicking Fourths.
Homemade ice cream on the deck in prelude to Vern’s Fourth of July Fireworks show.  (He bought as many fireworks as 12-year-olds do in their wildest 4th of July dreams!)  Then, later that night, Vern saying, “Peter, grab a beer and let’s see what Mars is up to tonight.”
And we’d have another half-dozen beers though he’d switch to martinis sans that pesky vermouth and look through Vern’s telescope at the stars.
Uncle Vern…
Damn, I miss that rollicking old guy, Robert Taylor-handsome with his thick mop of wavy black hair that turned chrome silver in his later years and which he’d always kept combed, from as far back as I can remember, in an Elvis Presley bouffant.
Vern with that big, hearty laugh.
Vern pulling that Skoal tin out of his back pocket, tapping it once with his knuckle, then dipping in and tucking a pinch against his gum.
Vern and his bear hugs.
Vern and the little blue Ford tractor he was always puttering around his yard on.
Vern and his retirement-years of truck-farming and hauling produce into the Missoula farmer’s market every Saturday morning in the summer.  He marveled at the green thumbs of the Hmong immigrants.  (If Vern had a racist bone in his body, I sure never saw it.  He treated everyone, strangers of every stripe, like they were family.)
Vern and his bees and his honey…  Got swarmed on once, bit bad, and almost died.  All the booze in his system probably saved him...
Vern loved his dogs so much I thought of them more as cousins than pets, and I still remember most of their names--Taffy, Sandy, Roscoe.  Nourished by all that love, they lived damn near as long as horses.
Vern passing out drunk under the dining room table with his dogs curled up taut again him.
Sure, Uncle Vern had a drinking problem--it was one of those family scandals much whispered about in kitchens--and it eventually killed him…in his 70’s!  Drunk or sober, there’s not another person in the world I’ve more enjoyed being around, especially on the  Fourth of July.
I saw Vern’s grave in the Bottineau, North Dakota cemetery a few years ago, where most of my family on both sides, including my mother, is buried.  There it was:  “Vernon Meyer” carved into that granite stone amongst so many others and all that green, green grass and the vaulting blue sky and silence.
I almost laughed out loud at the joke of seeing his name there.  But Vern really is there, not in his kitchen or on his deck--buried under that stone.
A graveyard was the last place in the world I ever expected to see Vern Meyer’s name.  That’s how alive he was.
But that’s where is now.
Uncle Vern, I hope you’re having a grand time with your Skoal and your vermouth-free martinis and binoculars and your old wooden ice cream machine, talking and laughing with Cousin Linda, whom you’re with again, and all your beloved critters.  I tell you, my arm aches just thinking about that damn ice cream machine and you peeking under the lid and laughing that deep, rolling laugh of yours and saying, “Oh, you’ve got a long ways to go yet, Peter!”
And then you’d laugh some more and sip your beer and stare at eagles through your ever-present binoculars.
Pssshhhhhttttttt!
This one’s for you, Uncle Vern.
(The next one’s gonna be, too.) 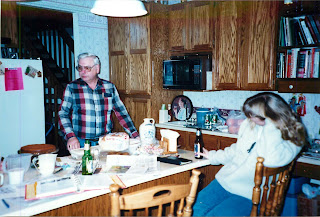 [Here's Uncle Vern in his kitchen, my wife Gena listening raptly to another long-windy.]

[Here's me following in my uncle's footsteps, on his dining room floor...] 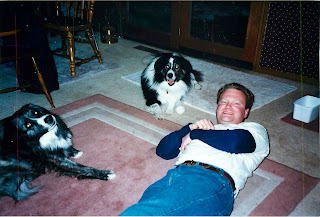