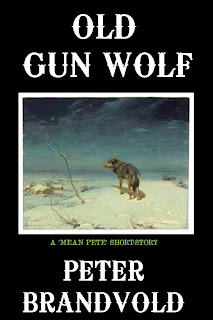 I was out strolling around the ravine the other night with my old dogs, and the idea for this story dropped right out of the sky, burrowed through my noggin, and drilled into my brain.  I couldn't let go of it.  I just got to thinking that wouldn't it be something if some gun-slinger made it into his old age and merely wanted to be left alone with his old dog on his shotgun ranch in the middle of nowhere only to be hunted down by his very own son, now a lawman, for killing his mother nigh on twenty-five years ago?

Believe me, it ain't gonna be what you'd expect so put away your hankies!  You should know by now that Mean Pete don't write "Little House on the Prairie!"

OLD GUN WOLF starring a brand-new old hero Wilbur Calhoun will be up at Amazon and Barnes & Noble soon for a whopping .99 cents!  Dig deep!

Mean Pete His Own Mean An' Nasty Self