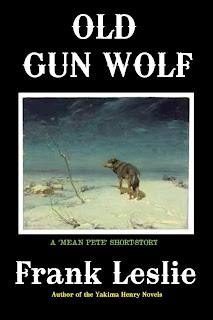 Up and running at Amazon for a penny less than a buck!

Soon to be at Barnes & Noble.  (They're really SLOW to get stuff up on their site!)

FOR EX-GUNMAN WILBUR CALHOUN, THE PAST BECOMES HIS FIERCEST ENEMY...

Ex-Confederate soldier, ex-Indian fighter, ex-train robber, ex-gunslinger...ex-father... Wilbur Calhoun just wants to run his little ranch in the San Juan Mountains of Colorado, a quiet place even at the turn-of-the-century.  He wants to be left alone, just him and his collie dog, Shep.  He wants to weather his last days in peace.

But then a rider comes after him at the head of a mountain snowstorm.  That rider turns out to be Wilbur’s son, Devlin, whom Wilbur hasn’t seen since the boy was two years old.

Devlin is a deputy U.S. marshal now, and he’s come to arrest his father for murder.  But not just any murder.  The murder of Devlin’s mother over twenty-five years ago in Tennessee...

Wilbur Calhoun might be old and just want to live quietly and anonymously, but does that mean he’ll go to the hangman peacefully, even when escorted by his long-lost son?

Remember, this is a Frank Leslie yarn!

Nowhere will you find more vivid characters and compelling Western action for 99 cents!