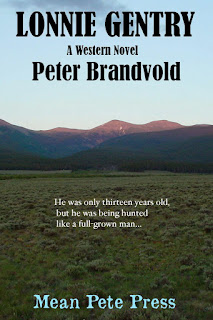 This is the cover of the wild-assed action-western I'm hammering this poor old, tortured keyboard on.  The hero is a thirteen-year-old-boy, and it will be suitable for younger readers.  It's a rough and rowdy coming of age story, and it's the kind of story Mean Pete would have loved reading when he was thirteen...between dips into Mickey Spillane, that is...

It also features Wilbur Calhoun, the old man from my "Old Gun Wolf" yarn, which is for sale at Amazon and B&N (wink-wink.)

I might send this to a traditional publisher--one has shown interest--because I'd like to see it in libraries where kids can flip through it and soil the pages with their sticky, grubby hands.  I loved libraries as a kid and attribute the old Carnegie Library in Wahpeton, North Dakota, in the mid-70s for turning my head to reading and writing and thereby missing out on a life of crime by a hair's breadth.

If only those dear old ladies could have taught me math!

Something screeched through the air about six inches in front of Lonny Gentry’s face and made a loud whunk! as it crashed into a tree just ahead and left of him.  The crash of a rifle cut through the afternoon silence of this high mountain forest, and flatted out over the valley below, chasing its echoes like a rabid dog trying to bite its own tail.
Lonny shouted a curse as he leaped back along the cattle trail he’d been following on his search for bogged calves.  He stumbled back so quickly, his heart turning somersaults in his chest, that he got his boots tangled, and went down hard on his butt.
His hat tumbled off his head.
He cursed again.  The pain of the fall felt like a bayonet blade rammed up his rear end.  This time the curse was drowned by another loud whunk! as yet another bullet screeched in from his right to ricochet loudly off a mossy, gray boulder on the upslope to his left.
“What the hell?” exclaimed the thirteen year old who reserved his “barn talk,” as his mother called it, for when he was alone with just his horse...or when someone was trying to drill a tunnel between his ears with a bullet.
Lonnie grabbed his hat, scrambled off the trail’s downslope side.  The rifle crashed again on the heels of a dull thud, which was the bullet plowing into the pine needle-carpeted slope on the other side of the trail.
That shot was well shy of Lonnie, which told him the shooter had lost track of him.  Holding his hat as he lay belly down between two tall pines and staring along the slope, in the direction he’d been heading when he was so rudely interrupted, hot fury washed through Lonnie Gentry.  His first thought had been some cork-headed fool had mistaken him for a deer or an elk, but the persistence with which they’d continued shooting had made him begun to doubt the possibility.
Now a man’s voice yelled from the densely forested upslope, “You git him, Chuck?”
And another man’s voice answered, “Not sure!  Seen him go down, but he might’ve hotfooted it!”
The rage in Lonnie dwindled quickly to fear.
Nope, they hadn’t mistaken him for game.  They’d known he was two-legged, and they were either after money, which he didn’t have, or his horse.  Possibly the Winchester .44-40 repeating rifle riding in the scabbard attached to his saddle.  Which, in turn, was attached to his horse, General Sherman, whom he’d left down trail a ways to forage for himself along Willow Run, a cold mountain stream cutting straight down out of the mountains.
“Let’s move in slow-like and check it out,” called the man on the upslope.  “Take care--the rest are probably around!”
The hair along the back of Lonnie’s neck pricked.  They were heading toward him, and he hadn’t liked the sound of their voices.  They were pinched voices.  The voices of determined men.  Likely, desperate men.
Probably outlaws on the run from some posse.  Maybe in need of guns, ammo, and horses.
at May 21, 2013